2feb12:00 pm- 1:30 amSoviet Judgment At Nuremberg: A New History Of The International Military Tribunal After WWII By Francine Hirsch

This event will be held virtually as a Zoom webinar and streamed via YouTube Live. There will be no in-person event.

Click here to purchase the book from Book Culture NYC.

Register here for the Zoom webinar, or tune in on YouTube Live. 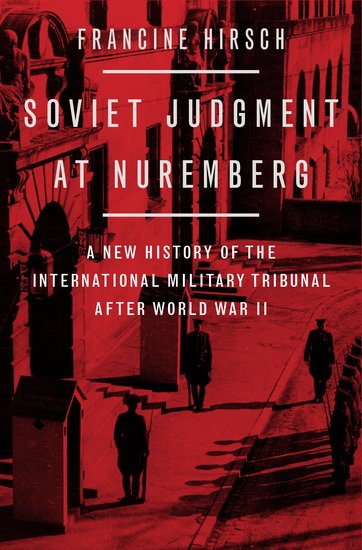 Please join the Harriman Institute and the Columbia Department of History for a discussion with Francine Hirsch (University of Wisconsin-Madison), author of Soviet Judgment at Nuremberg: A New History of the International Military Tribunal after World War II (Oxford University Press, 2020), in conversation with Miriam Schulz (Department of Yiddish Studies, Columbia University). Moderated by Alexander Cooley (Harriman Institute).

Organized in the immediate aftermath of World War Two by the victorious Allies, the Nuremberg Trials were intended to hold the Nazis to account for their crimes — and to restore a sense of justice to a world devastated by violence. As Francine Hirsch reveals in this immersive, gripping, and ground-breaking book, a major piece of the Nuremberg story has routinely been omitted from standard accounts: the part the Soviet Union played in making the trials happen in the first place.

Soviet Judgment at Nuremberg offers the first complete picture of the International Military Tribunal (IMT), including the many ironies brought to bear as the Soviets took their place among the countries of the prosecution in late 1945. Everyone knew that Stalin had allied with Hitler before the Nazi invasion of the Soviet Union in 1941. The Molotov-Ribbentrop Pact hung heavy over the courtroom, as did the suspicion that the Soviets had falsified evidence in an attempt to pin one of their own war crimes, the mass killing of Polish officers in the Katyn Forest, on the Nazis. Moreover, key members of the Soviet delegation, including the Soviet judge and chief prosecutor, had played critical roles in Stalin’s infamous show trials of the 1930s. For the American prosecutor Robert H. Jackson and his colleagues in the British and French delegations, Soviet participation in the IMT undermined the credibility of the trials and indeed the moral righteousness of the Allied victory.

Yet without the Soviets Nuremberg would never have taken place. Soviet jurists conceived of the legal framework that treated war as an international crime, giving the trials a legal basis. The Soviets had borne the brunt of the fighting against Germany, and their almost unimaginable suffering gave them moral authority. They would not be denied a place on the tribunal and moreover were determined to make the most of it. However, little went as the Soviets had planned. Stalin’s efforts to steer the trials from afar backfired. Soviet war crimes were exposed in open court. As relations among the four countries of the prosecution foundered, Nuremberg turned from a court of justice to an early front of the Cold War.

Hirsch’s book provides a front-row seat in the Nuremberg courtroom, while also guiding readers behind the scenes to the meetings in which secrets were shared, strategies mapped, and alliances forged. Soviet Judgment at Nuremberg offers a startlingly new view of the IMT and a fresh perspective on the movement for international human rights that it helped launch.

Francine Hirsch is Vilas Distinguished Achievement Professor of History at the University of Wisconsin-Madison, where she teaches Soviet and Modern European history. Her first book, Empire of Nations: Ethnographic Knowledge and the Making of the Soviet Union (2005), received several prizes, including the Herbert Baxter Adams Prize of the American Historical Association.