In Conversation with Historians: Teaching Outside The Comfort Zone of The Historical Canon

27jan4:00 pm- 5:30 pmFeaturedIn Conversation with Historians: Teaching Outside The Comfort Zone of The Historical Canon 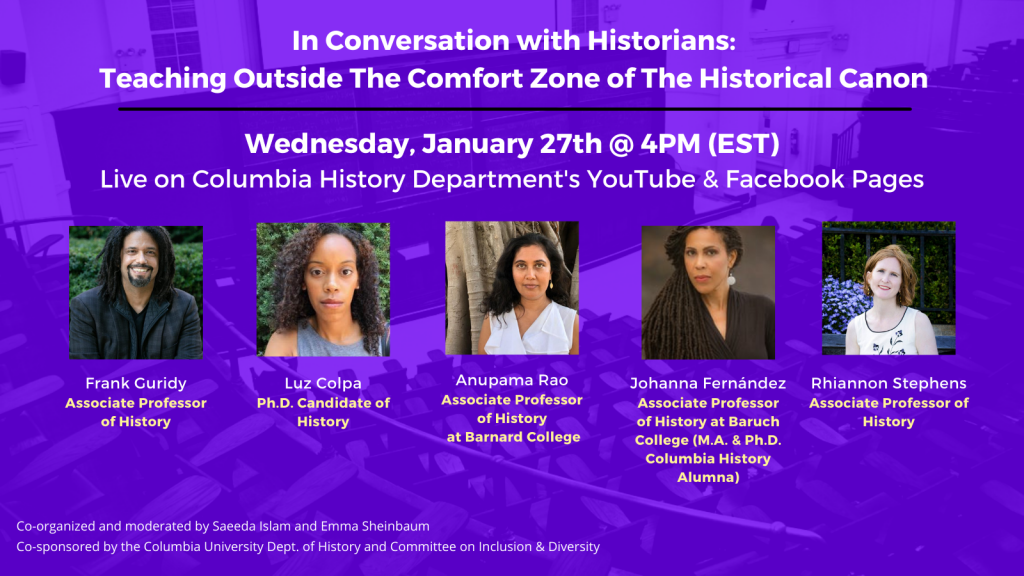 Join us for an organic discussion about teaching against the institutional and canonical grain, cultivating inclusive classroom environments, gender dynamics in academia, the importance of tying lived experiences and scholarly work, and related topics.

If you are an educator, or student, you could benefit from this discussion!

Anupama Rao is a TOW Associate Professor of History, Barnard and MESAAS (Columbia) in the Women’s, Gender and Sexuality Studies, History, Human Rights departments. She has research and teaching interests in gender and sexuality studies; caste and race; historical anthropology; social theory; comparative urbanism; and colonial genealogies of human rights and humanitarianism.

Frank Guridy is an associate professor in the Columbia history department. He specializes in sport history, urban history, and the history of the African Diaspora in the Americas.

Luz Colpa is a doctoral student in African history in the Columbia History department. Her interests include the history of household, family and gender in twentieth century West Africa and late-imperial France. Colpa’s research is centered on interracial, transnational and intercultural marriage in the Francophone world (1945-1974).

Rhiannon Stephens is an Associate Professor in the Columbia history department. She specializes in the history of precolonial and early colonial East Africa from the late first millennium CE through the twentieth century.

Johanna Fernández is a native New Yorker. She received a PhD in History from Columbia University and an AB in Literature and American Civilization from Brown University. Fernández is an Associate Professor of history at Baruch College of the City University of New York where she teaches 20th Century U.S. History, the history of social movements, the political economy of American cities, and African-American history. Fernández published her most recent manuscript, The Young Lords: A Radical History.

A panel discussion with Manan Ahmed on his new book, The Loss of Hindustan: The Invention of India

29jan10:10 am- 12:00 pmA panel discussion with Manan Ahmed on his new book, The Loss of Hindustan: The Invention of India 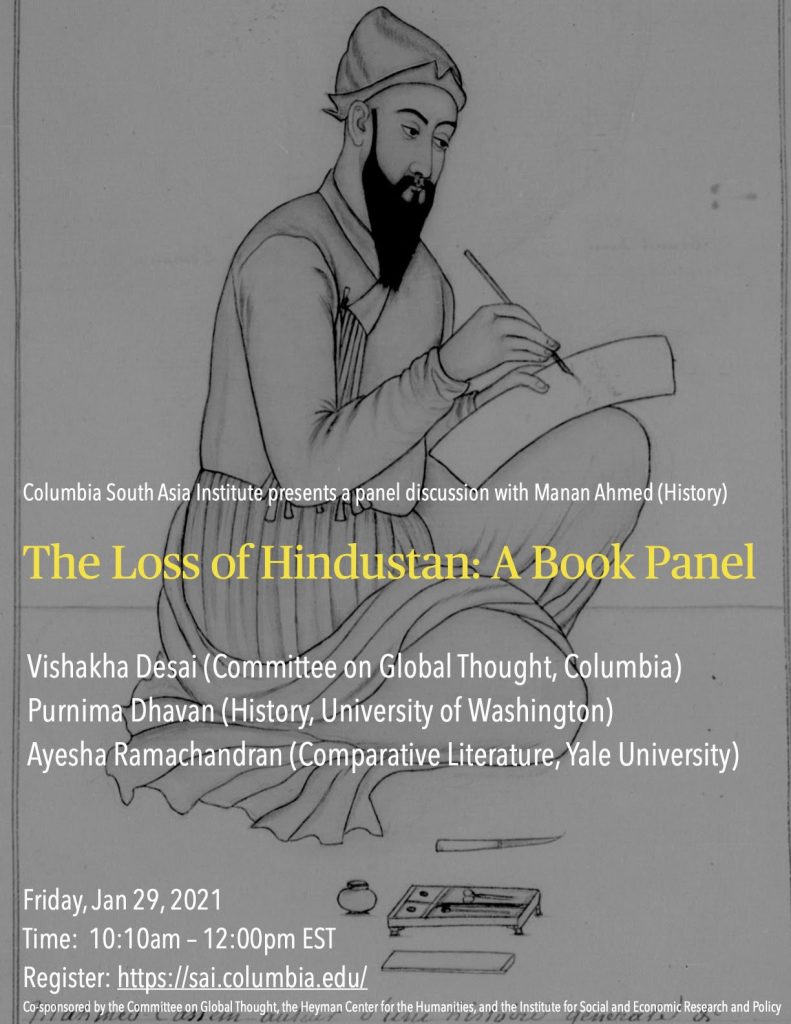 A panel discussion with  Manan Ahmed (History) On his new book, The Loss of Hindustan: The Invention of India

29jan10:10 pm- 12:00 pmA panel discussion with  Manan Ahmed (History) On his new book, The Loss of Hindustan: The Invention of India

On his new book, The Loss of Hindustan: The Invention of India

Registration details to be announced

Co-sponsored by the Committee on Global Thought, the Heyman Center for the Humanities, and the Institute for Social and Economic Research and Policy

Manan Ahmed is Associate Professor in the History Department at Columbia University. He is an historian of South Asia and the littoral western Indian Ocean world from 1000-1800 CE. His areas of specialization include intellectual history in South and Southeast Asia; critical philosophy of history, colonial and anti-colonial thought. He is interested in how modern and pre-modern historical narratives create understandings of places, communities, and intellectual genealogies for their readers. Prof. Ahmed’s second book, The Loss of Hindustan: The Invention of India (Harvard University Press, 2020), tells a history of the historians of the subcontinent from the tenth to the early twentieth century. The core of the book is the history Tarikh-i Firishta which was written by Muhammad Qasim Firishta (b. ca. 1570) in the Deccan in the early seventeenth century. Broadly, the book presents a concept-history of “Hindustan,” a political and historiographic category that was subsumed by the colonial project of creating British India and the subsequent polities of “Republic of India” and “Islamic Republic of Pakistan.”

Dr. Vishakha N. Desai is Chair, Committee on Global Thought; Senior Advisor for Global Affairs to the President of Columbia University; and a Senior Research Scholar for the School of International and Public Affairs at Columbia University. She also serves as Senior Advisor for Global Programs to the Solomon R. Guggenheim Foundation. From 2004 through 2012, Dr. Desai served as President and CEO of the Asia Society, a global organization dedicated to strengthening partnerships between Asia and the U.S.  In 2012, in recognition of Dr. Desai’s leadership in the museum field, President Barack Obama appointed her to serve on the National Museum and Library Services Board. An internationally renowned scholar of Asian art, she has published and lectured extensively on the intersection of traditional and contemporary arts and policy in diverse countries of Asia.  Dr. Desai holds a B.A. in Political Science from Bombay University and an M.A. and Ph.D. in Asian Art History from the University of Michigan, in addition to honorary degrees from Williams College, Centre College, Pace University, The College of Staten Island, and Susquehanna University.

Purnima Dhavan is an Associate Professor in the Department of History at the University of Washington.  Her Fields of Interest include Comparative Gender; Environmental History; Islamic Studies; Literature; Science and Technology; and South Asia.  Her research interests encompass the social and cultural history of early modern South Asia, 1500-1800. The ways in which religious, linguistic, and status identities shaped the political and cultural institutions of the Mughal period are central to her work.  Prof. Dhavan’s  first book, When Sparrows Became Hawks: the Making of Khalsa Martial Tradition (2011) examined the transformation of North Indian peasants into high-status warriors as they became members of the Sikh warrior order, the Khalsa.  Her second book project, The Lords of the Pen: Literary Associations in Early Modern South Asia, examines the literary activities of poets in emerging urban centers of the Mughal Empire to understand how participation in literary associations shaped understandings of caste, gender, and religious identity, to engage with larger questions of how notions of the “public” and “common good” emerged in different parts of the world.

Ayesha Ramachandran is an Associate Professor of Comparative Literature at Yale University.  Her research interests include Early modern European literature and cultural history; Renaissance poetry; history of science and technology (sixteenth and seventeenth century); cartography and literature; early modern empires and international law; history of philosophy; Europe and the Indo-Islamic world.  Her recent work focuses on Europe’s relations with an expanding world.  Her first book, The Worldmakers (University of Chicago Press, 2015) charts transnational encounters and the early mechanisms of globalization from the late fifteenth to the early eighteenth centuries. It was awarded the MLA’s Scaglione prize in Comparative Literary Studies (2017), the Milton Society of America’s Shawcross Prize for the best book chapter on Milton (2016), and the Sixteenth Century Studies Association’s Founder’s Prize for the best first book manuscript (2015). In addition to literary and intellectual historical questions, Prof. Ramachandran is interested in early modern maps (particularly world mapping), the history of science and technology, early modern empires, and the rich visual archive of illustrated books in the period). Her current book project, Lyric Thinking: Humanism, Selfhood, Modernity, argues for the central importance of lyric form and language in shaping new intellectual possibilities for the self in the early modern period and beyond.

In this conversation with Camille Robcis, Lucienne Peiry explores artists who use their own bodies as medium of expression in the isolation and exclusion of psychiatric hospitals. These artists create real or dreamlike clothes and bodily chimeras: a wedding dress created from threads pulled from used bed sheets, asylum outfits transformed and adorned with embroidered writings, costumes woven with frayed rags; the adornments are part of an extravagant ingenuity. Marguerite Sirvins, Agnes Richter, Anghus McPhee, and Arthur Bispo do Rosario create clothes that they feel are endowed with magical and healing virtues. Seeing their works triggers in the spectator a strong bodily reaction.

Lucienne Peiry is an art historian, specialist of Art Brut, curator of exhibitions in Europe and Japan, especially “Intextricabilia, enchevêtrements magiques” at la Maison rouge, Paris, 2017, and “Ecrits d’Art Brut”, at the Tinguely Museum, in Basel, in 2021. From 2001 to 2011, she was the Director of the Collection de l’Art Brut in Lausanne. Lecturer at the EPFL (Swiss Federal Institute of Technology) since 2015, she has written extensively on Art Brut, particularly L’Art Brut (translated into English, German and Chinese), and in 2020 Écrits d’Art Brut: Graphomanes extravagants. Lucienne Peiry also hosts a website called Notes d’Art Brut.

Camille Robcis is Associate Professor of History and French at Columbia University. 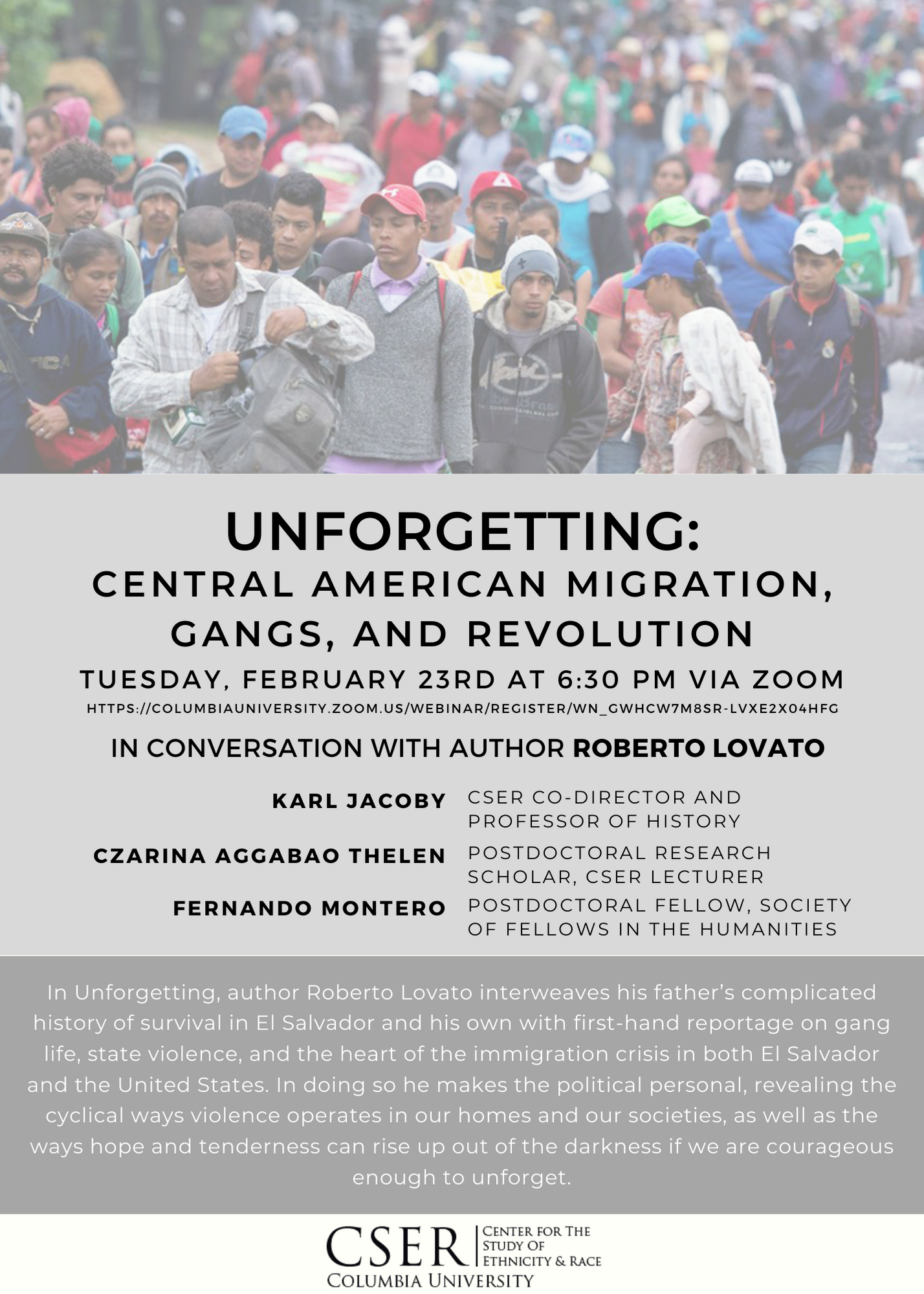 In conversation with Author Roberto Lovato.

In Unforgetting, Roberto interweaves his father’s complicated history of survival in El Salvador and his own with first-hand reportage on gang life, state violence, and the heart of the immigration crisis in both El Salvador and the United States.