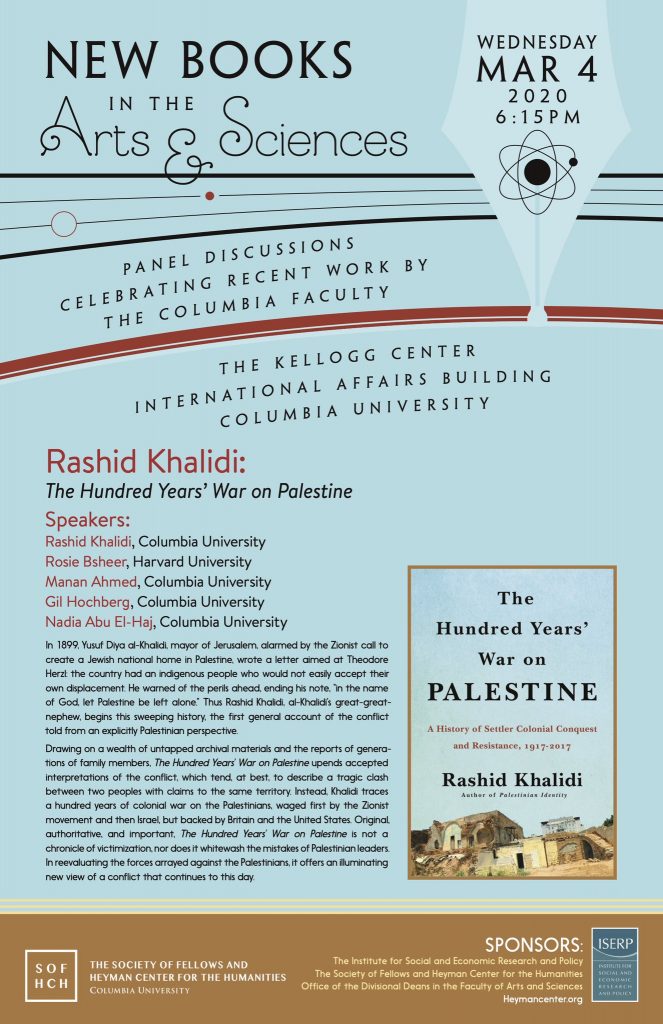 In 1899, Yusuf Diya al-Khalidi, mayor of Jerusalem, alarmed by the Zionist call to create a Jewish national home in Palestine, wrote a letter aimed at Theodore Herzl: the country had an indigenous people who would not easily accept their own displacement. He warned of the perils ahead, ending his note, “in the name of God, let Palestine be left alone.” Thus Rashid Khalidi, al-Khalidi’s great-great-nephew, begins this sweeping history, the first general account of the conflict told from an explicitly Palestinian perspective.

Drawing on a wealth of untapped archival materials and the reports of generations of family members—mayors, judges, scholars, diplomats, and journalists—The Hundred Years’ War on Palestine upends accepted interpretations of the conflict, which tend, at best, to describe a tragic clash between two peoples with claims to the same territory. Instead, Khalidi traces a hundred years of colonial war on the Palestinians, waged first by the Zionist movement and then Israel, but backed by Britain and the United States, the great powers of the age. He highlights the key episodes in this colonial campaign, from the 1917 Balfour Declaration to the destruction of Palestine in 1948, from Israel’s 1982 invasion of Lebanon to the endless and futile peace process.

Original, authoritative, and important, The Hundred Years’ War on Palestine is not a chronicle of victimization, nor does it whitewash the mistakes of Palestinian leaders or deny the emergence of national movements on both sides. In reevaluating the forces arrayed against the Palestinians, it offers an illuminating new view of a conflict that continues to this day.

Rashid Khalidi is the author of Palestinian Identity, Brokers of Deceit, and The Iron Cage, among others. His writing has appeared in the New York Times, Boston Globe, Los Angeles Times, Chicago Tribune, and many other journals. He is the Edward Said Professor of Modern Arab Studies at Columbia University in New York and editor of the Journal of Palestine Studies.

Rosie Bsheer is Assistant Professor of History at Harvard University. She has been published in journals including International Journal of Middle East Studiesand Past and Present, and has co-edited The Dawn of the Arab Uprisings: End of An Old Order? with Bassam Haddad and Ziad Abu-Rish. She is currently writing a book provisionally titled Archive Wars: Spectacle, Speculation, and the Politics of History in Saudi Arabia.

Manan Ahmed is Associate Professor in the Department of History at Columbia University. He is the author of A Book of Conquest: The Chachnama and the Origins of Islam in South Asia, and the forthcoming book The Loss of Hindustan: Tarikh-i Firishta and the Work of History, among other publications.

Gil Hochberg is Ransford Professor of Hebrew and Comparative Literature, and Middle East Studies at Columbia University. She is the author of In Spite of Partition: Jews, Arabs, and the Limits of Separatist Imagination; and, most recently, Visual Occupations: Vision and Visibility in a Conflict Zone, among other published works.

Nadia Abu El-Haj is Professor in the Department of Anthropology at Barnard College and at Columbia University. She is the author of two books, Facts on the Ground: Archaeological Practice and Territorial Self-Fashioning in Israeli Society, and The Genealogical Science: The Search for Jewish Origins and the Politics of Epistemology, among other published works. Her forthcoming book is provisionally titled Soldier Trauma, The Obligations of Citizenship, and the Forever Wars.