11nov5:30 pm- 7:30 pmOttoman Culture and Literature in the Age of the Süleyman the Magnificent 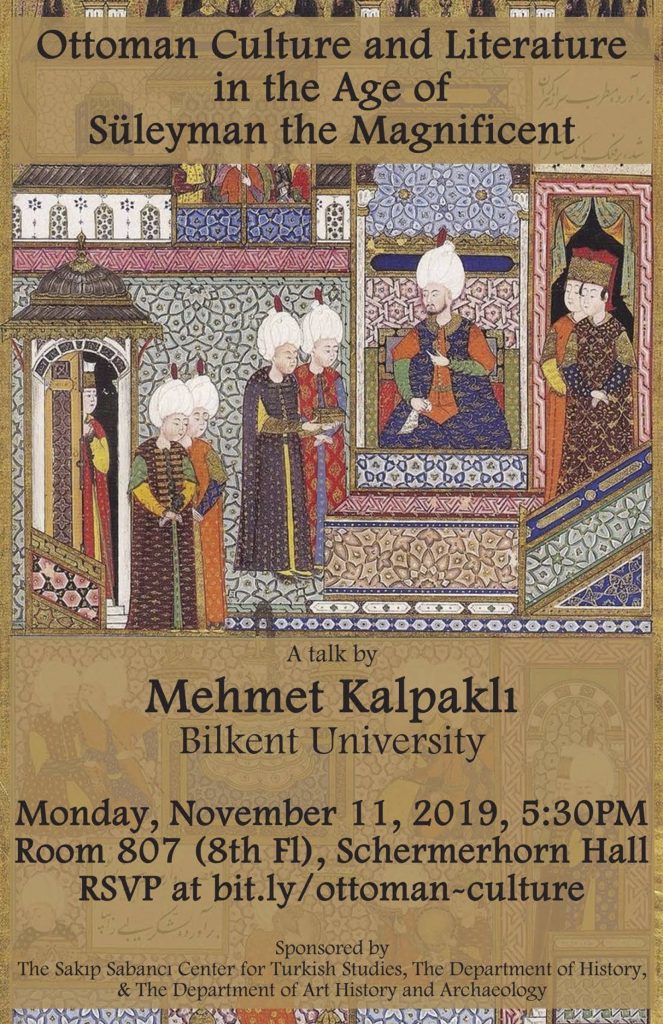 This talk will be an overview of Ottoman culture and literature in the reign of Süleyman the Magnificent (1520 – 1566) with numerous visual presentations. Süleyman was not only a sultan and patron of the arts but also an artist (goldsmith) and poet himself. Moreover, his time was not only the zenith of Ottoman power but also “Golden Age” as the Empire reached its height in the arts and culture.

Mehmet Kalpaklı (Professor of Ottoman History) is the Chair of both the Department of History and the Department of Turkish Literature at Bilkent University. He also serves as the Director of the Halil Inalcik Center for Ottoman Studies and the Director of the Center for Turkish Literature. His specialization is in cultural and literary history of the Ottoman Empire. Some of his publications are: The Age of Beloveds: Love and The Beloved in Early Modern Ottoman Turkish and European Literature, Culture, and Society (with Walter G. Andrews), Duke University Press, USA 2005; Ottoman Lyric Poetry: An Anthology, (with Walter Andrews and Najaat Black), The University of Texas Press, 1997, and expanded edition: University of Washington Press in 2006. Osmanlı Divan Şiiri Üzerine Metinler (Texts on Ottoman Divan Poetry), Istanbul: Yapı Kredi Press, 1999; The Complete Works of Halide Edib Adıvar (18 books) Can Press.