NYU: JAMES STAFFORD, “SOVEREIGNTY AND COMMERCE: THE CASE OF IRELAND.”

James Stafford: Sovereignty and Commerce: The Case of Ireland

James Stafford: Sovereignty and Commerce: The Case of Ireland 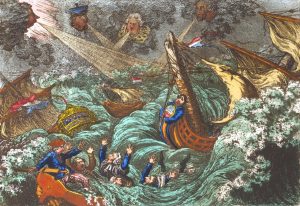 This lecture offers a new account of Irish thinking about the relationship between sovereignty and commerce during the global ‘age of revolutions’ (1770s-1840s). Considering key thinkers and politicians associated with the Volunteers, the United Irishmen, and Young Ireland, the lecture will explore how successive Irish national movements thought about Ireland’s place in Europe, the British Empire, and the world at large. Irish thinkers, it argues, were participants in a European debate about whether or not the apparent benefits of long-distance trade could be separated from the dangers of violence, luxury and corruption–in short, the excesses of the ‘mercantile system’ condemned by the Scottish philosopher Adam Smith.

James Stafford is an Assistant Professor in the History Department at Columbia University, specialising in the political and intellectual history of Ireland, Britain and Europe since 1750. His book The Case of Ireland: Commerce, Empire and the European Order, 1750-1848 was published by Cambridge University Press this year. He also writes on contemporary British and European politics for outlets including Dissent, Political Quarterly, The Nation, The Guardian and OpenDemocracy, and is a contributing editor at Renewal: A Journal of Social Democracy (Lawrence & Wishart, UK).

In accordance with University policy, all guests to Glucksman Ireland House in-person events must be fully vaccinated for COVID-19.

All guests will be required to show proof of being fully vaccinated and boosted (or, if eligible, proof of exemption) at the door. Vaccine documentation must include your name, birthdate, vaccine name or manufacturer, and the dates of each dose. Excelsior passes are not valid.

For assistance, please contact Glucksman Ireland House at ireland.house@nyu.edu or by phone at (212) 998-3955.