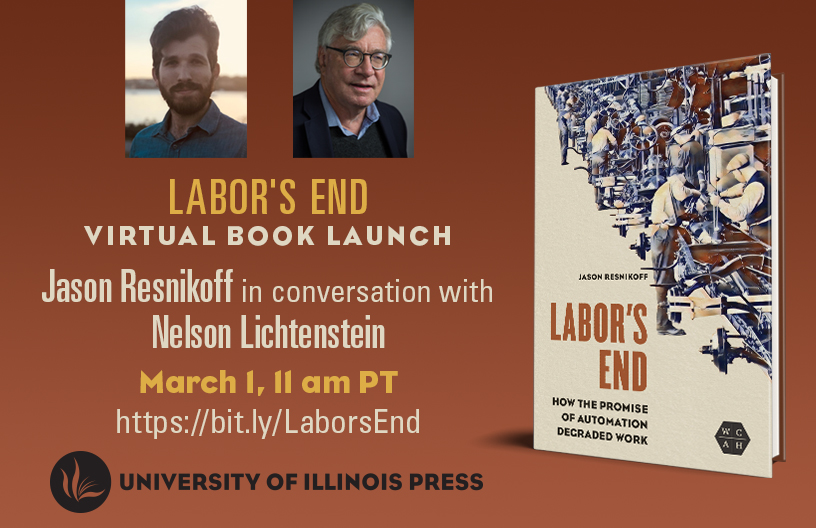 Join Jason Resnikoff (History Department Ph.D. Alum – GSAS ’19) and Nelson Lichtenstein for a virtual event celebrating the release of “Labor’s End: How the Promise of Automation Degraded Work” on March 1 at 11am PT.

Learn more about the book: https://go.illinois.edu/f21resnikoff

Jason Resnikoff is a Core Lecturer in the History Department at Columbia University. He specializes in labor history, the history of global capitalism, intellectual history, and the history of technology. His book, “Labor’s End: How the Promise of Automation Degraded Work,” explores the ideological origins of automation in the US in the middle of the twentieth century. You can find his work in Labor,  International Labor and Working-Class History, Tropics of Meta, Zócalo Public Square, Western Humanities Review, Paris Review Daily, and the Encyclopedia of American Recessions and Depressions. He is affiliated with Columbia University’s American Studies Department, where he advises undergraduate senior theses, as well as Columbia’s Justice in Education initiative, through which he teaches incarcerated students. His time working as an organizer for the United Auto Workers grounds his scholarship. His current research interests include the intersection of racism and technology.

Nelson Lichtenstein is Research Professor at the University of California, Santa Barbara. An historian of labor and political economy, he is the author or editor of 16 books, including a biography of the labor leader Walter Reuther and State of the Union: A Century of American Labor (2013). With Gary Gerstle and Alice O’Connor he edited Beyond the New Deal Order: From the Great Depression to the Great Recession. (2019); and with Roman Huret and Jean-Christian Vinel he edited a companion volume, Capitalism Contested: the New Deal and Its Legacies (2020). Other publications include, The Right and Labor in America: Politics, Ideology, and Imagination (2012), edited with Elizabeth Shermer.