IRAAS: "In The Shadow of The Ivory Tower: How Universities Are Plundering Our Cities" with Davarian L. Baldwin and Mabel O. Wilson

7oct6:30 pm- 8:00 pmIRAAS: "In The Shadow of The Ivory Tower: How Universities Are Plundering Our Cities" with Davarian L. Baldwin and Mabel O. Wilson 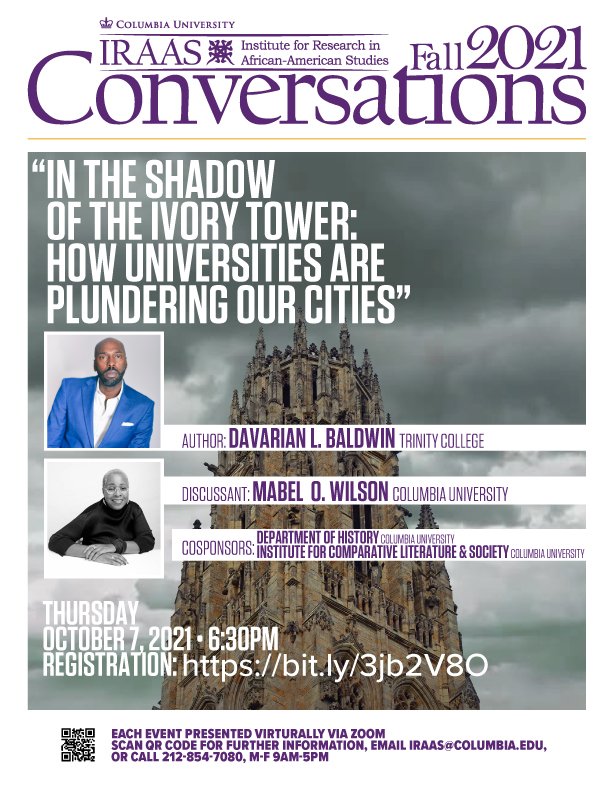 Davarian L. Baldwin is the Paul E. Raether Distinguished Professor of American Studies and Founding Director of the Smart Cities Research Lab at Trinity College in Hartford, Connecticut. He is the author of In the Shadow of the Ivory Tower: How Universities are Plundering Our Cities, Chicago’s New Negroes: Modernity, the Great Migration, and Black Urban Life, and co-editor (with Minkah Makalani) of the essay collection, Escape From New York: The New Negro Renaissance beyond Harlem. Baldwin is currently at work on the book Land of Darkness: Chicago and the Making of Race in Modern America (Oxford University Press).

In addition to teaching and writing, Baldwin sits on the Editorial Boards for the Journal of Urban History, the Journal of African American History, the American Studies Journal, and Black Perspectives. Baldwin is also co-editor of the Urban Life, Landscape, and Policy book series for Temple University Press and serves as a Distinguished Lecturer for the Organization of American Historians. His commentaries have been featured in numerous outlets from NBC News, PBS, and The History Channel to USAToday, the Washington Post and TIME.