In Conversation with Historians: Women’s History Around the World 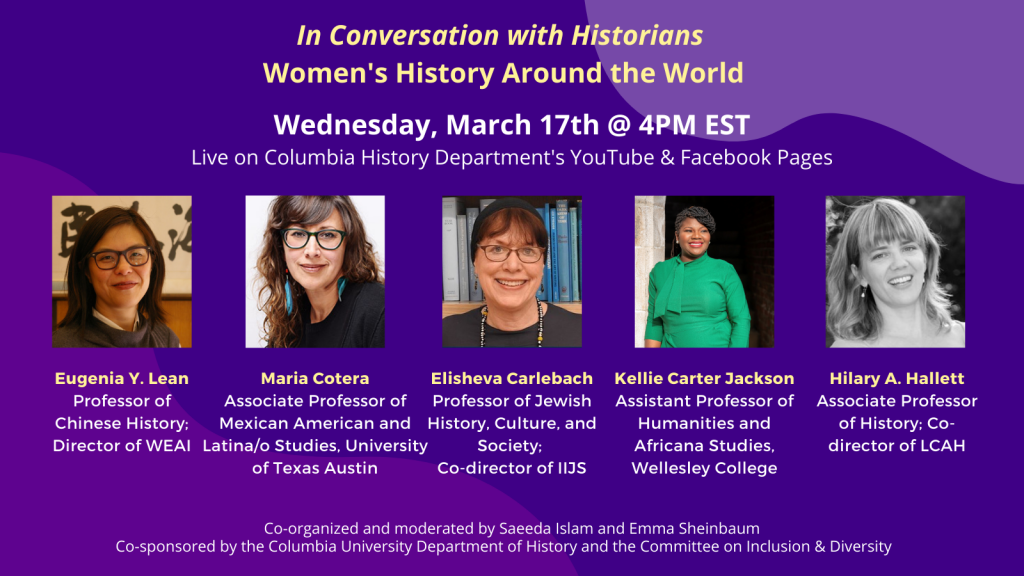 Drawing from their research areas, our panelists will discuss women’s struggles and achievements past and present, women’s issues and achievements that have often been overlooked in formal records or mainstream history that have made an impact on women’s rights and liberation, significant women they have encountered in research, narratives of repair for transgeneration trauma, and how we can empower women within the university and without.

Includes a live Q&A element.
Visit the In Conversation with Historians page for more information about the series.
EUGENIA LEAN is the Director of the Weatherhead East Asian Institute and Professor of History at Columbia University. Her research focuses on the history of modern China. Her publications include Public Passions: The Trial of Shi Jianqiao and the Rise of Popular Sympathy in Republican China (University of California Press, 2007), which was awarded the 2007 John K. Fairbank prize. Her recent publication, Vernacular Industrialism in China: Local Innovation and Translated Technologies in the Making of a Cosmetics Empire, 1900-1940 (Columbia University Press, 2020), explores how lettered men of early twentieth century China pursued industry and science in unconventional ways, experimenting innovatively with both local and global practices of manufacturing. Dr. Lean has received a number of academic fellowships including the Charles A. Ryskamp (ACLS) award and a National Endowment of the Humanities grant, and was recently a fellow at the Institute for Advanced Studies. She was featured in “Top Young Historians,” History News Network (fall 2008) and received the 2013-2014 Faculty Mentoring Award for faculty in Columbia’s Graduate School of Arts and Sciences. She is currently writing a book on China’s involvement in shaping twentieth-century global regimes of intellectual property rights from trademark infringement to patenting science.
*
DR. MARIA EUGENIA COTERA is an associate professor in the Mexican American and Latino Studies Department at the University of Texas—Austin. She holds a PhD from Stanford University’s Program in Modern Thought, and an MA in English from the University of Texas. Her first book, Native Speakers: Ella Deloria, Zora Neale Hurston, Jovita González, and the Poetics of Culture, (University of Texas Press, 2008) received the Gloria Anzaldúa book prize for 2009 from the National Women’s Studies Association (NWSA). Her edited volume (with Dionne Espinoza and Maylei Blackwell), Chicana Movidas: New Narratives of Feminism and Activism in the Movement Era (University of Texas Press, 2018) has been adopted in courses across the country. Professor Cotera is the co-founder and project director of the Chicana por mi Raza Digital Memory Collective, an online interactive archive of oral histories and material culture documenting Chicana Feminist praxis over the Long Civil Rights period. She has curated several public history exhibits, including Las Rebeldes: Stories of Strength and Struggle in southeast Michigan (2013) and Chicana Fotos: Nancy De Los Santos (2017) and currently serves as an advisor/consultant to numerous large-scale digital public humanities projects focusing on the Latinx experience. Professor Cotera has served on the National Council for the American Studies Association (2007-2010), the governing board of the Latina/o Studies Association (2014-2015), the program committee for the National Women’s Studies Association (2017-2018), and the Arte Público Recovery Project Governing Board (2018-present).
*
HILARY HALLETT teaches broadly about the cultural politics of the United States from the antebellum period through 1968. Her research focuses on women’s history, comparative feminisms, and the relationship between popular culture and changes in gender and sexuality in a transatlantic perspective. She is currently completing, The Siren Within: Elinor Glyn and the Invention of Glamour, which explores the transatlantic networks that supported the success of the British ‘sex novelist’ and early Hollywood personality, Elinor Glyn.
*
ELISHEVA CARLEBACH, Salo Wittmayer Baron Professor of Jewish History, Culture, and Society, specializes in the cultural, intellectual, and religious history of the Jews in Early Modern Europe. Areas of particular interest include the intersection of Jewish and Christian culture and its effect on notions of tolerance, religious dissent, conversion, messianism, and communal governance. She has twice held fellowships from the National Endowment for the Humanities. She was a Fellow at the New York Public Library Center for Scholars and Writers, Tikvah Fellow at NYU Law School, and Fellow at the Katz Center, University of Penn. She served as Editor of the Association for Jewish Studies Review and serves on the Board of the Center for Jewish History. She has served as President of the American Academy for Jewish Research and is currently Co-Director, Institute for Israel and Jewish Studies at Columbia.
*

KELLIE CARTER JACKSON is the Knafel Assistant Professor of the Humanities in the Department of Africana Studies at Wellesley College.  She is author of the award-winning Force & Freedom: Black Abolitionists and the Politics of Violence. Her book was listed among 13 books to read on African American History by the Washington Post. Carter Jackson is also co-editor of Reconsidering Roots: Race, Politics, & Memory.  She is the co-host of the podcast “This Day in Esoteric Political History.” She earned her B.A at her beloved Howard University and her Ph.D from Columbia University working with the esteemed historian Eric Foner. You can follow her on Twitter @kcarterjackson