In Conversation with Historians: Immigration Justice, Xenophobia, & Histories of Violence

For Columbia affiliates: register and attend via Zoom 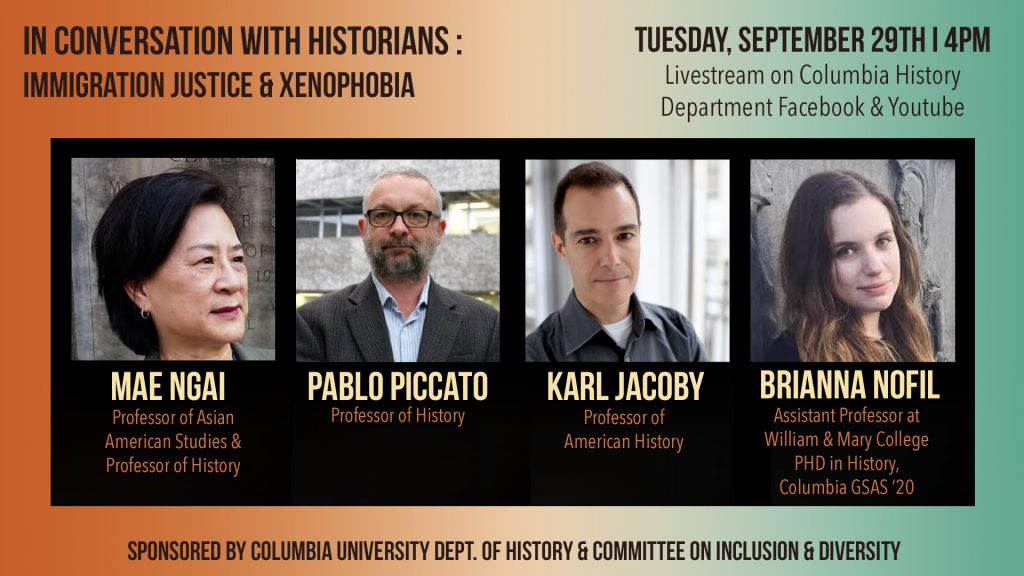 This panel will cover immigration justice issues including xenophobia, ICE, CBP and their presence at BLM protests, the US-Mexico border, histories of borders and immigration, histories of state violence, and related current events!

Brianna Nofil is an Assistant Professor of History at the College of William and Mary. She earned her PhD from Columbia University (GSAS ’20). Nofil’s research areas focus on immigration, borders and borderlands, carceral state, and legal.

Pablo Piccato, professor, specializes in Mexican history. He has worked on the political and cultural history of Mexico, and on the history of crime. He is currently working on an overview of crime in Mexico during the twentieth century.

Mae M. Ngai, Lung Family Professor of Asian American Studies and Professor of History, is a U.S. legal and political historian interested in questions of immigration, citizenship, and nationalism. Before becoming a historian she was a labor-union organizer and educator in New York City, working for District 65-UAW and the Consortium for Worker Education.

Karl Jacoby is a specialist in environmental, borderlands, and Native American history. His books include Crimes Against Nature: Squatters, Poachers, Thieves and the Hidden History of American Conservation and Shadows at Dawn: A Borderlands Massacre and the Violence of History.