To commemorate the centenary of World War I, this workshop will feature presentations on the global spread and 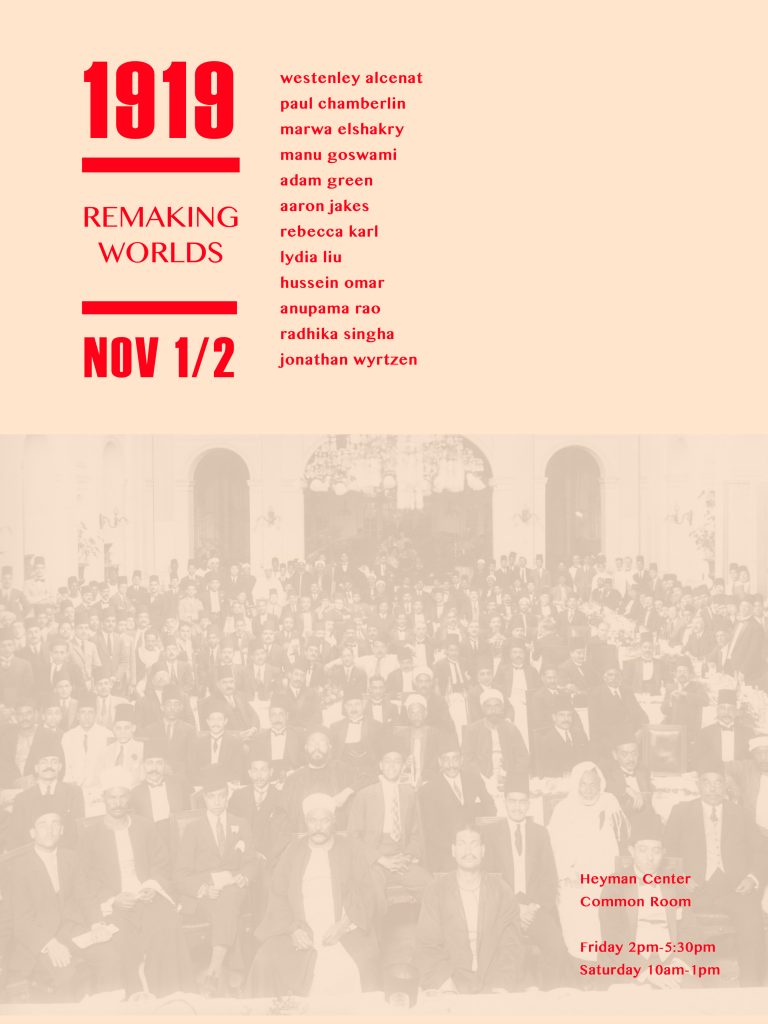 To commemorate the centenary of World War I, this workshop will feature presentations on the global spread and the enduring consequences of the war, in order to reframe the relationship between colony and metropole.

The Great War devoured lives, landscapes, and imperial institutions. Global 1919: Remaking Worlds will examine the aftermath of WWI on a global scale. Although experienced differently in different parts of the world, 1919 collectively transformed the conceptual vocabulary and political practice of empires, nations and states worldwide. Indeed, when the old power brokers of Europe gathered to divide the spoils of war they encountered questions and demands they had not anticipated. In the aftermath of the War, disenfranchised colonial subjects revolted in pursuit of independence, formerly marginalized groups demanded new rights, and theorists, visionaries, and artists drew inspiration from this climate of hope and uncertainty. By bringing together local and international historians interested in exploring the events and after-effects of 1919, we aim to attend to the fundamental transformations of world orders and imperial powers that were inaugurated by war and revolution.

Many studies of global 1919 tend to view the “provincialization” of Europe against the backdrop of anticolonialism. Debates about the future of political communities at this time were critically poised between the alternatives of nation and empire, even as a range of new hybrids—from mandate trusteeship, to dominion colonies, and practices of indirect rule—emerged across Eurasia, the Middle East and sub-continental India, and Africa. Meanwhile, the Russian Revolution of 1917 (and the formation of the Soviet Union) had deeply impacted growing demands for self-determination by colonized peoples, as did new calls for minority rights, political independence, and human emancipation more broadly. Global 1919 follows suit and takes inspiration from a number of new works that have challenged older narratives of internationalism. While many such conventional histories in the past privileged the role of international organizations such as the League of Nations or the United Nations, as a number of new scholarly works have shown, these organizations themselves might best be understood as merely responding to rather than critically  shaping the then global rise of rights discourses and revolutionary international orders.

By bringing together world regions typically separated by governing distinctions between the history of Europe and those of the “darker nations,” or by post-War regional divisions and disciplines organized around “area studies” we hope to examine the manner in which debates about self determination, political solidarity, minority rights and identity shaped intellectual traditions in decolonizing nations. Exploring a range of popular uprisings, revolutionary claims and political communities, we also aim to ask about the reach and relevance of a variety of global radical movements, from Marxist internationalism, pan-Islamism and pan-Africanism to emerging Afro-Asian solidarity movements. Yet, as we hope to underscore in our workshops too, the aftermath of WWI effected a profound transformation of political as much as social life. As such, we aim to explore the many experiments in rewriting histories of the self as much as the radical futures of communities in the global south that were torn apart by the violence of colonial regimes, imperial institutions and liberal juridical orders.

Professors of History Marwa Elshakry and Anupama Rao will be participating in this conference.