Geraldo Cadava, The Hispanic Republican: The Shaping of an American Political Identity, from Nixon to Trump

8oct2:00 pm- 3:15 pmGeraldo Cadava, The Hispanic Republican: The Shaping of an American Political Identity, from Nixon to Trump

Book Talk with Geraldo Cadava (Northwestern University) "The Hispanic Republican: The Shaping of an American Political Identity, from Nixon 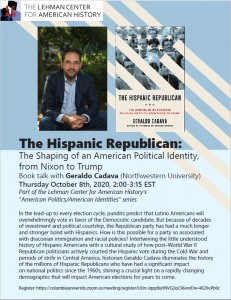 In the lead-up to every election cycle, pundits predict that Latino Americans will overwhelmingly vote in favor of the Democratic candidate. But because of decades of investment and political courtship, the Republican party has had a much longer and stronger bond with Hispanics. How is this possible for a party so associated with draconian immigration and racial policies? Intertwining the little understood history of Hispanic Americans with a cultural study of how post–World War II Republican politicians actively courted the Hispanic vote during the Cold War and periods of strife in Central America, historian Geraldo Cadava illuminates the history of the millions of Hispanic Republicans who have had a significant impact on national politics since the 1960s, shining a crucial light on a rapidly changing demographic that will impact American elections for years to come.