Lunch will be provided. Please RSVP to ynn2000@columbia.edu by February 4. 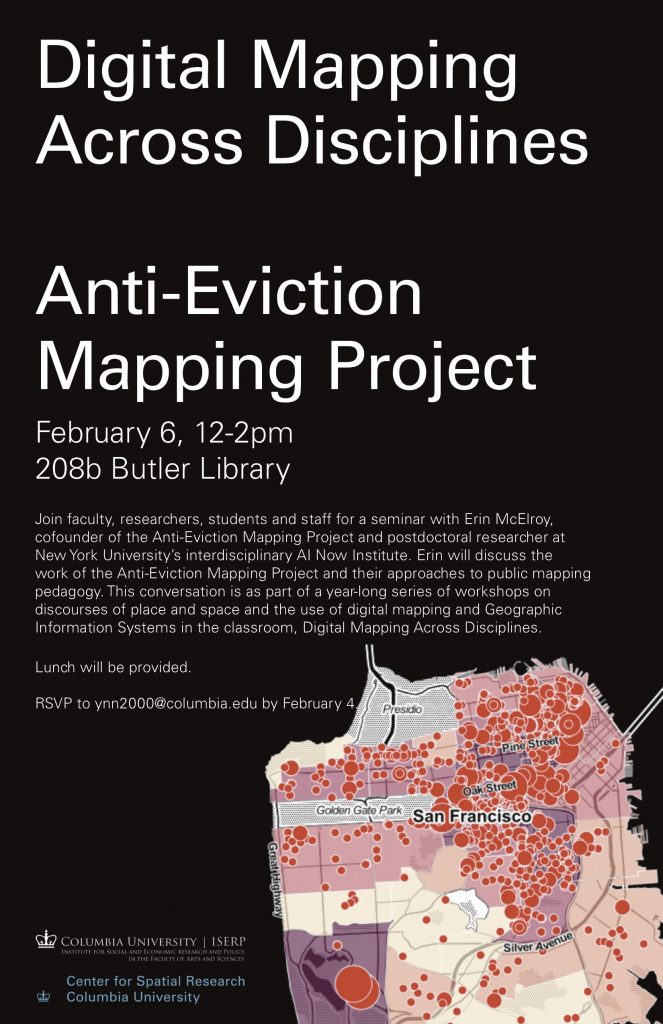 Lunch will be provided. Please RSVP to ynn2000@columbia.edu by February 4.

Erin McElroy is a postdoctoral researcher at New York University’s interdisciplinary AI Now Institute, researching the digital platforms used by landlords in order to surveil and racialize tenants. Erin is also cofounder of the Anti-Eviction Mapping Project, a data visualization, critical cartography, and multimedia collective documenting dispossession and resistance struggles upon gentrifying landscapes. Erin earned a doctoral degree in Feminist Studies from the University of California, Santa Cruz, with a focus on the politics of space, race, and technology in Romania and Silicon Valley. More recently, Erin co-launched the Radical Housing Journal to foster housing and racial justice transnationally.

The Anti-Eviction Mapping Project is a data visualization, critical cartography, and multimedia collective documenting dispossession and resistance struggles upon gentrifying landscapes. The AEMP was founded in 2013 in the midst of the San Francisco Bay Area’s Tech Boom 2.0 and resultant gentrification. Since then, it has expanded to New York City and Los Angeles as well. As a volunteer-based collective, it prioritizes producing maps, data, and stories with those most impacted by gentrification, racial dispossession, and technocapitalism.

This seminar series is organized by the Center for Spatial Research with the Mapping Historical New York City project and is supported in part through a workshop grant from ISERP.