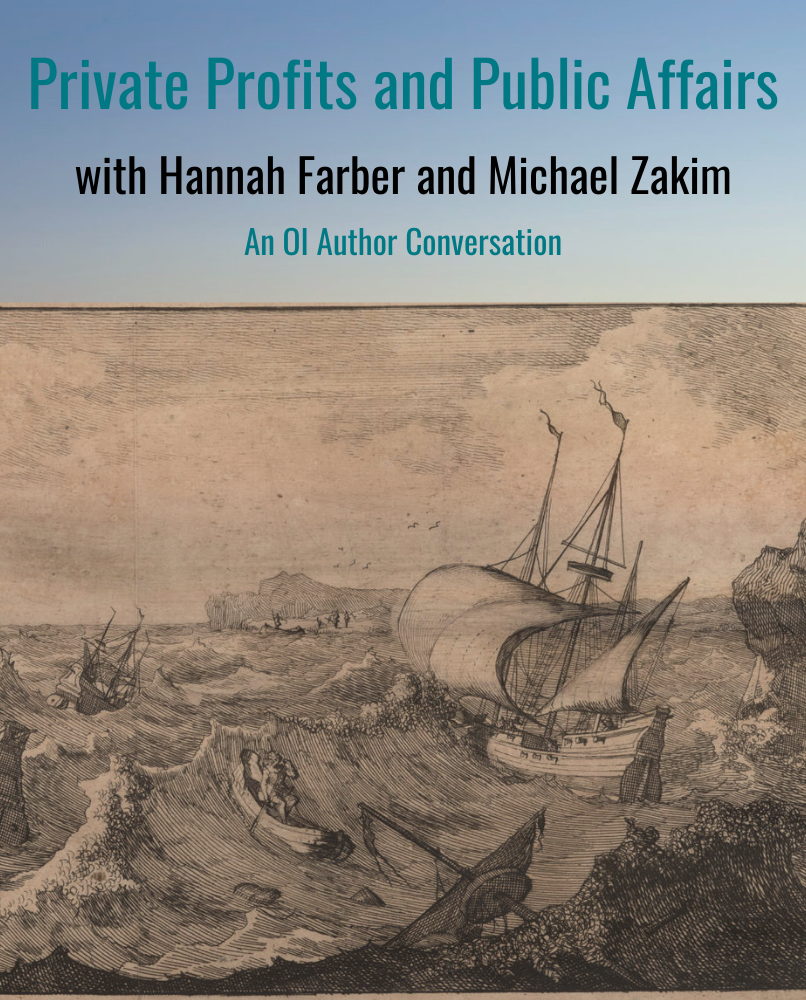 The rise of capitalism and the expansion of the market economy transformed the early U.S. republic, reshaping relations within the labor force as well as the relationship between state and society. As contingent as it was unsettling, that transformation is often associated with rise of textile factories in the North and the spread of cotton fields across the South. But it also played out in less obvious spaces. Behind closed doors, in what we would now call white–collar offices, men pushed paper, kept accounts, insured merchants against risk, and managed capital. In the process, they quietly helped redefine state power and civil society.

Please join Hannah Farber and Michael Zakim for a discussion of “Private Profits and Public Affairs.” Hannah Farber’s forthcoming Underwriters of the United States: How Insurance Shaped the American Founding explores connections between marine insurance and state formation. Michael Zakim has written widely about the cultural and intellectual underpinnings of market society. Most recently the author of Accounting for Capitalism: The World the Clerk Made (2018), he is currently writing a global history of paper. Hannah Farber specializes in the political economy of colonial North America, the early American republic, and the Atlantic World. Her first book, Underwriters of the United States (Omohundro Institute with partner the University of North Carolina Press, 2021) explains how the transnational system of marine insurance, by governing the behavior of American merchants, influenced the establishment and early development of the American republic. Michael Zakim teaches at Tel Aviv University. He is the author of several books about the economic history of early America, most recently Accounting for Capitalism. The World the Clerk Made, published by the University of Chicago Press in 2018. (The UCP is offering a 25% discount on all titles by Michael Zakim. Please refer to this flyer for more information.)

Our thanks to the John Carter Brown Library for the use of the “Shipwreck” image.