The Arnold A. Saltzman Institute of War and Peace Studies and The Urban and Social Policy Concentration at the School of International and

The Arnold A. Saltzman Institute of War and Peace Studies and The Urban and Social Policy Concentration at the School of International and Public Affairs presents

The book will be available for purchase and signing 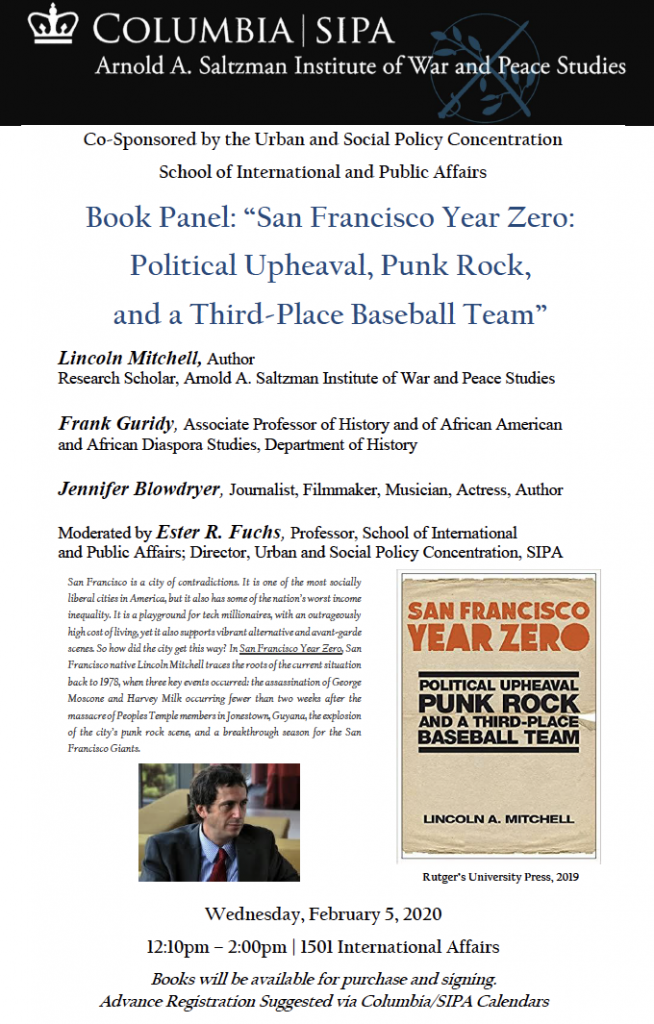 Advance registration suggested via the Columbia or SIPA events calendars 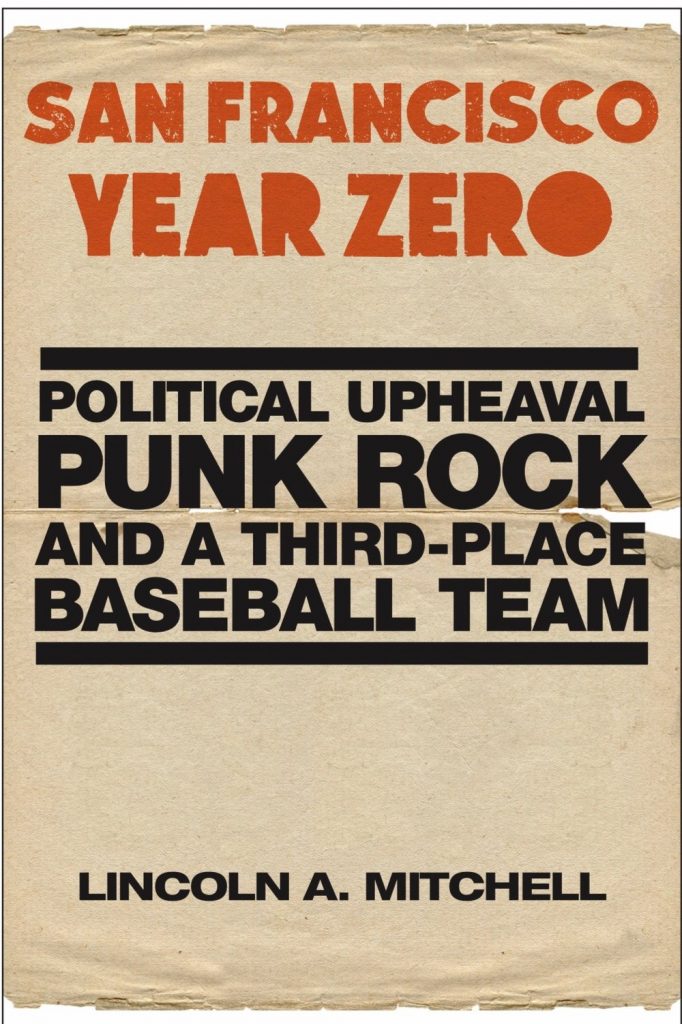 San Francisco is a city of contradictions. It is one of the most socially liberal cities in America, but it also has some of the nation’s worst income inequality. It is a playground for tech millionaires, with an outrageously high cost of living, yet it also supports vibrant alternative and avant-garde scenes. So how did the city get this way?

In San Francisco Year Zero, San Francisco native Lincoln Mitchell traces the roots of the current situation back to 1978, when three key events occurred: the assassination of George Moscone and Harvey Milk occurring fewer than two weeks after the massacre of Peoples Temple members in Jonestown, Guyana, the explosion of the city’s punk rock scene, and a breakthrough season for the San Francisco Giants. Through these three strands, Mitchell explores the rifts between the city’s pro-business and progressive-left politicians, the emergence of Dianne Feinstein as a political powerhouse, the increasing prominence of the city’s LGBT community, punk’s reinvigoration of the Bay Area’s radical cultural politics, and the ways that the Giants helped unify one of the most ethnically and culturally diverse cities in the nation.

Written from a unique insider’s perspective, San Francisco Year Zero deftly weaves together the personal and the political, putting a human face on the social upheavals that transformed a city.

Lincoln Mitchell is a writer, pundit and specialist in political development based in New York City and San Francisco. Lincoln has worked on democracy and governance related issues in the former Soviet Union, Eastern Europe, the Caribbean, the Middle East, Africa and Asia. He also works with businesses and NGOs globally, particularly in the former Soviet Union. Lincoln writes and speaks about US politics as well, and was the national political correspondent for The New York Observer from 2014-2016. Lincoln was on the faculty of Columbia University’s School of International Affairs from 2006-2013 and worked for years as a political consultant in New York City advising and managing domestic political campaigns.

Frank A. Guridy specializes in sport history, urban history, and the history of the African Diaspora in the Americas. He is the author of Forging Diaspora: Afro-Cubans and African Americans in a World of Empire and Jim Crow (University of North Carolina Press, 2010), which won the Elsa Goveia Book Prize from the Association of Caribbean Historians and the Wesley-Logan Book Prize, conferred by the American Historical Association. He is also the co-editor of Beyond el Barrio: Everyday Life in Latino/a America (NYU Press, 2010), with Gina Pérez and Adrian Burgos, Jr. His articles have appeared in the Radical History Review, Caribbean Studies, Social Text, and Cuban Studies. His fellowships and awards include the Scholar in Residence Fellowship at the Schomburg Center for Research in Black Culture and the Regents’ Outstanding Teaching Award from the University of Texas at Austin, and, most recently, the Mark Van Doren Award For Teaching at Columbia. In 2014-15 he held the Ray A. Billington Professorship in American History at Occidental College and the Huntington Library. He is completing a book on the intersections between sport, capitalism and the Black Freedom and Second-Wave feminist movements entitled The Athletic Revolution in Texas: A History of Sport and Society in the Lone Star State and is working on another entitled, Assembly in the Fragmented City: A History of the Los Angeles Memorial Coliseum.

Jennifer Blowdryer got her name from her SF punk band, the Blowdryers, in 1977. She remains a band singer/writer, recent releases include Blowdryer Punk Soul: Pinot Grigio and 4 Essays – The most harmless person you are ever going to meet in your life (Bent Boy Press, SF, 2018). Blowdryer’s books include: White Trash Debutante; Modern English: A slang dictionary; The Laziest Secretary in the World;  Where’s My Wife; and Good Advice for Young Trendy People of All Ages. She has written columns for Maximin Rock’n’Roll, New York Press, and Downtown, among others. She is also an actress – credits include for Vegas in Space (1991), Kamikaze Hearts (1986) and Once and Future Queen (2000).

Ester R. Fuchs is Professor of International and Public Affairs and Political Science and is the Director of the Urban and Social Policy Program at Columbia University’s School of International and Public Affairs. She served as Special Advisor to the Mayor for Governance and Strategic Planning under New York City Mayor Michael R. Bloomberg from 2001 to 2005. Previously, Professor Fuchs served as chair of the Urban Studies Program at Barnard College and Columbia College and founding director of the Columbia University Center for Urban Research and Policy.