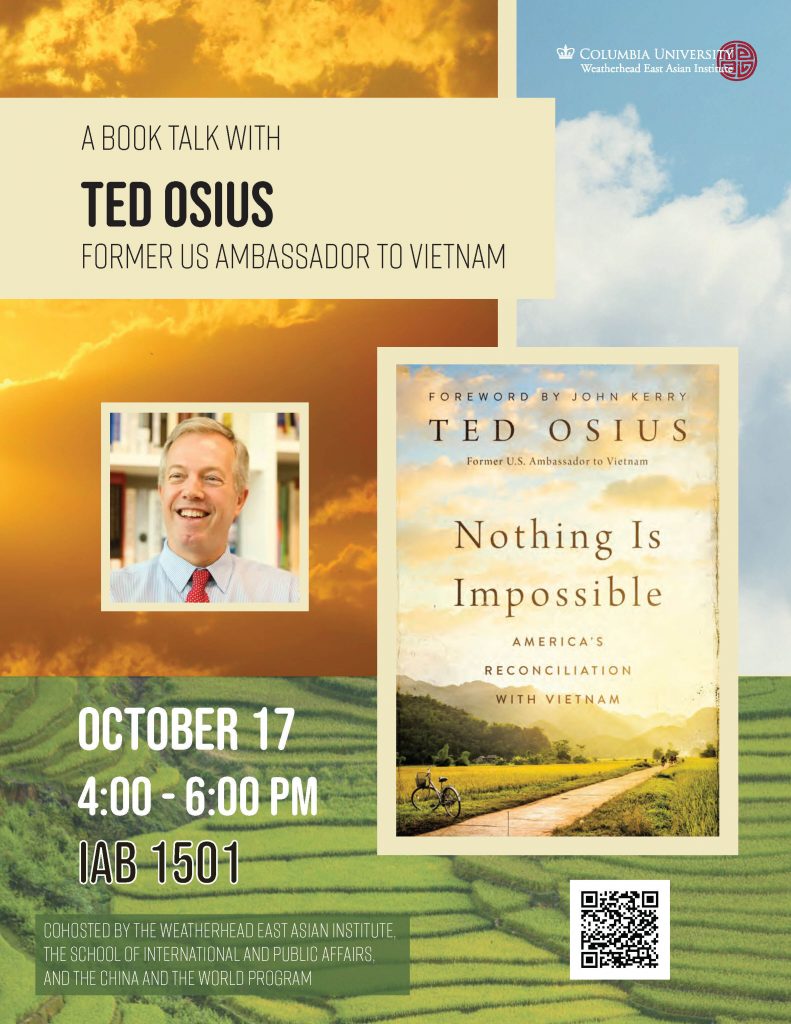 Today Vietnam is one of America’s strongest international partners, with a thriving economy and a population that welcomes American visitors. How that relationship was formed is a twenty-year story of daring diplomacy and a careful thawing of tensions between the two countries after a lengthy war that cost nearly 60,000 American and more than two million Vietnamese lives.

Ted Osius, former ambassador during the Obama administration, offers a vivid account, starting in the 1990s, of the various forms of diplomacy that made this reconciliation possible. He considers the leaders who put aside past traumas to work on creating a brighter future, including senators John McCain and John Kerry, two Vietnam veterans and ideological opponents who worked together for a greater cause, and Pete Peterson—the former POW who became the first US ambassador to a new Vietnam. Ambassador Osius also draws upon his own experiences working first-hand with various Vietnamese leaders and traveling the country on bicycle to spotlight the ordinary Vietnamese people who have helped bring about their nation’s extraordinary renaissance.

A diplomat for thirty years, Ambassador Osius served from 2014 to 2017 as US Ambassador to Vietnam. Leading a team of 900, he devised and implemented strategies to deepen economic, security and cultural ties between the two countries. Since his departure from government, he joined Google Asia-Pacific as Vice President for Government Affairs and Public Policy. Earlier, he was a senior advisor at the Albright-Stonebridge Group, and the first Vice President of Fulbright University Vietnam. Osius was associate professor at the National War College and Senior Fellow at the Center for Strategic and International Studies.

Osius was the first openly gay American ambassador in East Asia. He co-founded Gays and Lesbians in Foreign Affairs Agencies in 1992.

Ambassador Osius earned a Bachelor’s degree from Harvard University, a Master’s degree from Johns Hopkins University’s School of Advanced International Studies, and an Honorary Doctorate from Ho Chi Minh City University of Technology and Education. He was the first US ambassador to receive the Order of Friendship from the President of Vietnam.

This event is cosponsored by the WEAI, the School of International and Public Affairs, and CWP at Columbia University.