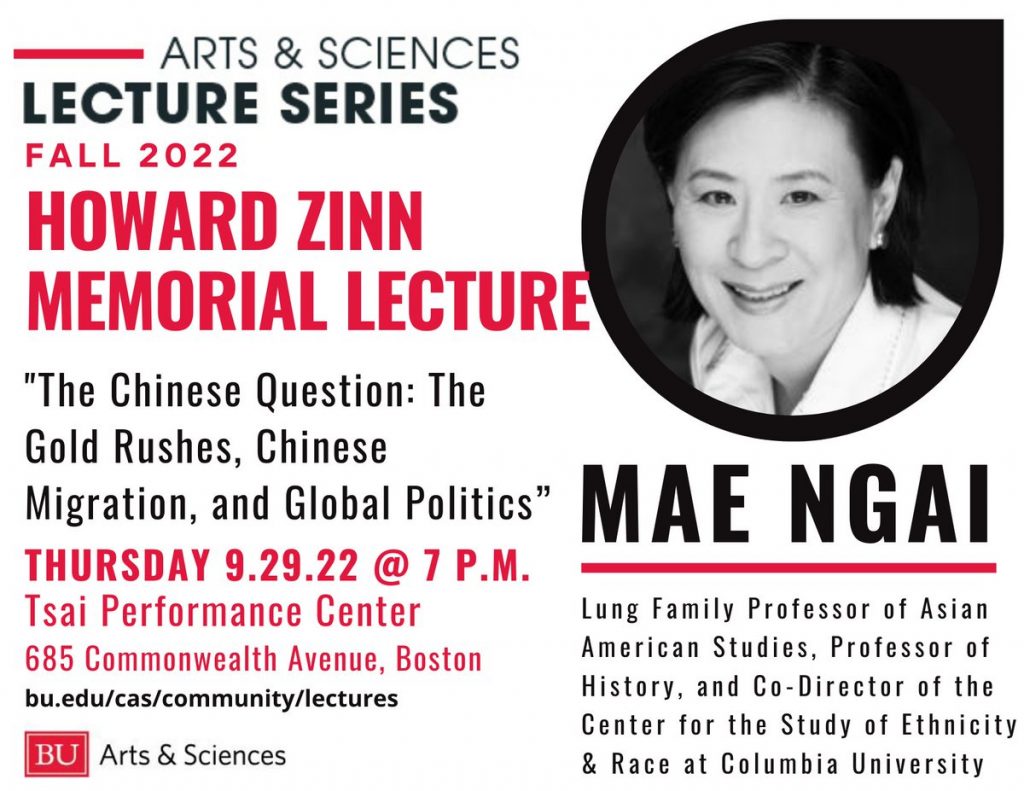 This year’s Howard Zinn Memorial Lecture will be presented by Dr. Mae Ngai, Lung Family Professor of Asian American Studies and Professor of History at Columbia University. The Chinese Question: The Gold Rushes, Chinese Migration, and Global Politics Since the beginning of the COVID-19 pandemic there has been a shocking rise in racism against Chinese and Asian Americans, including violence assaults and killings. This lecture discusses the origins of anti-Chinese racism in the U.S., locating it in the gold rushes from the middle of the nineteenth century to the early twentieth century, in the American west, Australia and South Africa. Anti-Chinese movements in the anglophone world led to laws excluding Chinese from immigration and citizenship, a product of an alchemy of race and money, capitalism and colonialism, and the rise of Great Britain and the United States as global hegemons and the concurrent isolation of China on the global stage.

Mae M. Ngai is Lung Family Professor of Asian American Studies and Professor of History, and Co-Director of the Center for the Study of Ethnicity and Race at Columbia University. She received her PhD from Columbia in 1998. She is a U.S. legal and political historian interested in questions of immigration, citizenship, and nationalism. She is author of the award-winning Impossible Subjects: Illegal Aliens and the Making of Modern America (2004); The Lucky Ones: One Family and the Extraordinary Invention of Chinese America (2010); and The Chinese Question: The Gold Rushes and Global Politics (2021), which won the 2022 Bancroft Prize and was a finalist for the LA Times book prize in history. She has been a Guggenheim Fellow and has received fellowships from the Institute for Advanced Study, the Cullman Center for Scholars and Writers at the NY Public Library, and the Library of Congress, among others. Ngai has written on immigration history and policy for the Washington Post, New York Times, Los Angeles Times, the Atlantic, and the Nation. Before becoming a historian she was a labor-union organizer and educator in New York City. She is now writing Nation of Immigrants: A Short History of an Idea (forthcoming from Princeton University Press). This annual lecture was endowed through the generosity of Alex H. MacDonald, Esq., CAS’72 and his late wife Maureen A. Strafford, M.D., MED’76.