The Government of Religious Life in Idi Amin’s Uganda

The Government of Religious Life in Idi Amin’s Uganda A lecture by Derek Peterson (University of Michigan) Wednesday, October 14 @

The Government of Religious Life in Idi Amin’s Uganda
A lecture by Derek Peterson (University of Michigan)
Wednesday, October 14 @ 4:10pm EST
On Zoom: register here to receive the webinar link 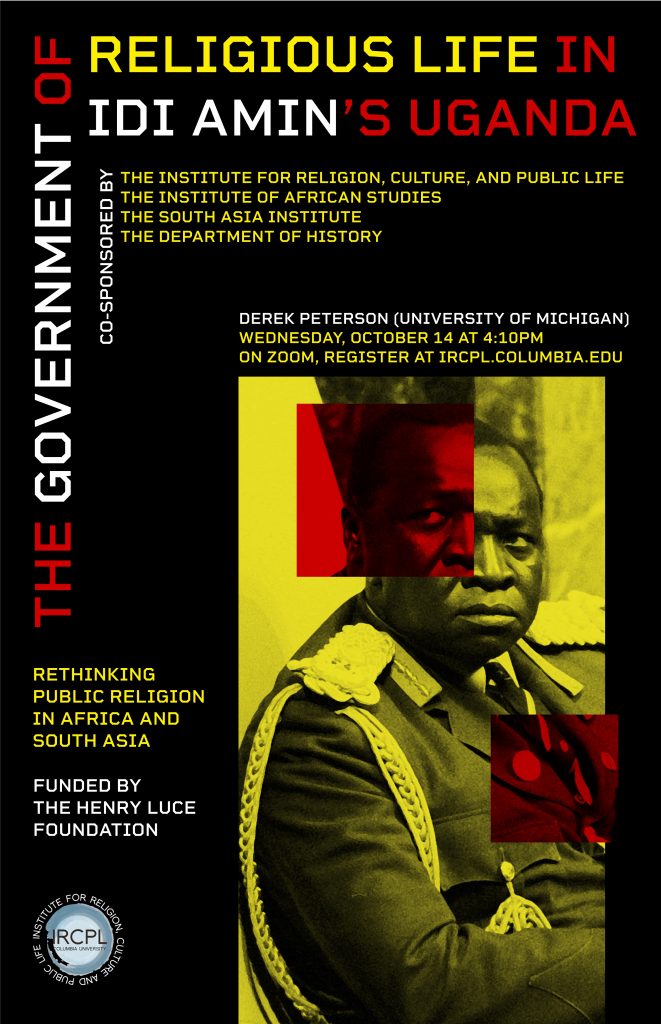 In what ways—under the eight year dictatorship of Idi Amin—was religion made public? Amin came to power in 1971 at a conjuncture in the history of technology: the new broadcasting capacities of radio allowed him to govern as a dictator, to set the pace of public life, to obliged everyone to march to the same tempo. Religion had to be reoriented. The space for dissident forms of Christianity and Islam was radically narrowed; pentecostals, Bahais, Adventists and other nonconformists were imprisoned, their property was seized, and their religious lives were foreclosed. At the same time new standards of religious conduct—particularly the notion of ‘African Traditional Religion’—were given substance in scholarship and in public culture. It was part of a process by which political life was evacuated of competition and loyalties were centred around the president.This lecture is organized by the Institute for Religion, Culture and Public Life and cosponsored by the Department of History. It is part of the Rethinking Public Religion in Africa and South Asia project at IRCPL (in collaboration with the Institute for African Studies and the South Asia Institute), funded by the Henry Luce Foundation.