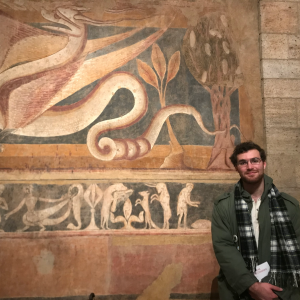 Charlie Steinman (he/him/his) is a PhD student in medieval history, working on petty officials and policing in Jewish and Christian communities in Provence and the Languedoc.  He is interested in the experience of power in medieval societies, as well as the relationship between violence and officialdom.  Charlie received his BA in History and Medieval Cultures from Brown University in 2020, where he wrote his senior thesis on slavery in medieval Marseille.  He intends to further explore the relationship between Jewish and Christian institutions of justice, both at the formal and informal level, in Latin and Hebrew sources.  Charlie is also an active organizer in the Student Workers of Columbia union.  When not writing, researching, or organizing, he enjoys listening to, writing, and playing music--especially punk and alternative from his hometown of Washington, DC.