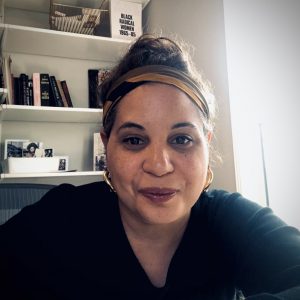 Sarah Haley, associate professor, has research interests in the history of gender and women, carceral history, Black feminist history and theory, prison abolition, and feminist archival methods.  She is the author of No Mercy Here: Gender, Punishment, and the Making of Jim Crow Modernity, published by the University of North Carolina Press in 2016.  No Mercy Here received awards from the Association of Black Women Historians, the American Historical Association, the American Studies Association, the National Women’s Studies Association, and the Southern Association for Women Historians and was selected for the National Book Foundation’s 2020-2021 Literature for Justice Reading List.  Professor Haley co-edited a special issue of Souls: A Critical Journal of Black Politics, Culture, and Society with Professors Prudence Cumberbatch and Dayo Gore.  Her writing has been published in edited volumes as well as journals including Signs: Journal of Women in Culture and Society, The Journal of African American History, GLQ: A Journal of Lesbian and Gay Studies, and Women & Performance: A Journal of Feminist Theory.  She is currently working on a book titled The Carceral Interior: A Black Feminist Study of American Punishment, 1966-2016.  Prior to arriving at Columbia, she worked as a paralegal and as an organizer with the hospitality workers’ union, UNITE HERE, and was the founding director of the Black Feminism Initiative at UCLA.