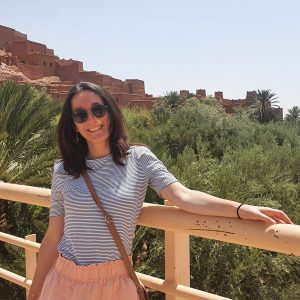 Marie Robin (she/her/hers) is a third-year Ph.D. student in the history department where she studies gender, race, sexuality, and military culture in the 20th-century French Empire. She is interested in colonial and post-colonial studies, Vietnamese history, the history of the modern Maghreb, the history of medicine and the body, and gender studies.

Her doctoral dissertation, tentatively entitled, “Managing Sex Overseas in the French Army: Bordel Militaire de Campagne (Mobile Field Brothels), Sexual Violence and Decolonization in Algeria and Vietnam (c. 1940-1960s),” assesses the transformation of the French military’s management of sex during the First Indochina (1946-54) and the Algerian wars (1954-62) and its impact on broader processes of decolonization. The dissertation particularly examines the institutionalization of the French system of military prostitution known as Bordel Militaire de Campagne, sanctioned by the French government for its troops and sustained by the sexual labor of indigenous women and girls. Especially, it excavates the voices and experiences of both women and servicemen under a trans-imperial lens and using a multilingual framework (French, Arabic, Vietnamese).

Before coming to Columbia, Marie received her BA in History and Middle-Eastern Studies from the American University of Paris (2017) and her MA in Early-Modern History from Durham University (2018). Marie writes public-facing history for the Synapsis: A Health Humanities Journal on military prostitution and has translated chapters of the forthcoming Cambridge History of the Vietnam War, vol. 1 & 3. In addition to her dissertation topic, she is working on an article that rethinks agency around tropes of silence and disclosure for genocidal rape victims in the aftermath of the 1994 Rwanda Genocide, using the oral history narratives of fourteen Tutsi women.