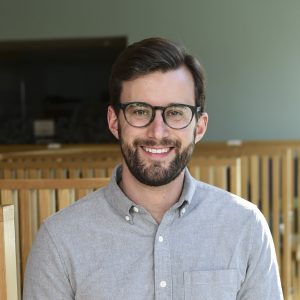 Jeffrey Wayno is a historian of the European Middle Ages who works as a librarian and curator in the Columbia University Libraries. He received his A.B. in history from Princeton (2007), an M.A. in Medieval Studies from University College London (2009), and his Ph.D. in medieval history from Columbia (2016). As the Collection Services Librarian at The Burke Library at Union Theological Seminary, Columbia University Libraries, he is responsible for both Burke's general and special collections, as well as the ancient, medieval, and religious studies collections at Butler Library, including the Ancient & Medieval and Papyrology & Epigraphy Reading Rooms. Burke, which is one of the largest theological libraries in the Western Hemisphere, houses a fascinating collection of rare materials, including Greek papyri, medieval and early modern manuscripts, incunables, and other early printed works. Jeffrey would be delighted to teach and consult on rare materials sessions based on these collections, and to provide research and teaching support for faculty and students in any field touching religion or the history and culture of the ancient and medieval worlds.

Outside of his work in the Libraries, Jeffrey regularly teaches Literature Humanities in Columbia's Core Curriculum. His research focuses on the institutional, religious, and legal history of the medieval Church; the medieval papacy; and the history of communication in the rough period 1000 to 1300. In addition to his 2016 dissertation, "Communication and the Limits of Papal Authority in the Medieval West, 1050-1250," he is the author of "Rethinking the Fourth Lateran Council of 1215," which appeared in Speculum in 2018, and "Governing Through Influence at the Thirteenth-Century Papal Court," which is forthcoming in the Journal of Medieval History. Currently, he is researching messengers as agents of political communication in the premodern world.