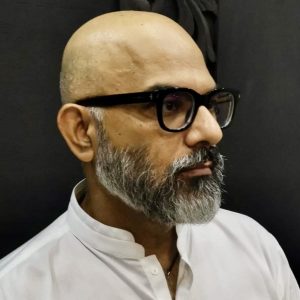 Manan Ahmed, Associate Professor, is a historian of South Asia and the littoral western Indian Ocean world from 1000-1800 CE. His areas of specialization include intellectual history in South and Southeast Asia; critical philosophy of history, colonial and anti-colonial thought. He is interested in how modern and pre-modern historical narratives create understandings of places, communities, and intellectual genealogies for their readers.

He is a member of Columbia's Center for Study of Ethnicity and Race and Committee on Global Thought; an Executive Editor for Journal of the History of Ideas; a Senior Editor at Comparative Studies of South Asia, Africa and the Middle East; the Chair of the South Asia Council at Association for Asian Studies, and on the Editorial Board for Philological Encounters.

His first monograph, A Book of Conquest: Chachnama and Muslim Origins in South Asia (Harvard University Press, 2016), is on the intellectual life of an early thirteenth-century Persian history Chachnama also known as Fathnama-i Sind (Book of the Conquest of Sindh). The book delves into how Muslim polities in Sindh addressed sacral differences, created new ethics of rule, and articulated a political theory of power in the thirteenth century Indian Ocean World. You can listen to two podcasts on the book--New Books and Ottoman History. There is also a book talk in Urdu.

His second monograph, The Loss of Hindustan: The Invention of India (Harvard University Press, 2020; pbk 2023), tells a history of the historians of the subcontinent from the tenth to the early twentieth century. The book is a concept-history of “Hindustan,”  focusing specifically on the work of the seventeenth century Deccan historian Firishta (fl. 1570-1620). In it, he argues for a decolonized philosophy of history for the subcontinent. The Loss of Hindustan was shortlisted for the Cundill History Prize 2021. You can listen to a podcast about the book with HistoryExtra.

He is currently working on two book projects. One, under contract with The New Press, is on memory, history and historiography in Pakistan. The second is on decolonization as method and praxis for history writing.

He has extensive background in digital history, in the history of archives in the global south and the problems of access and control to digitized materials. He founded Chapati Mystery--a cultural and intellectual history blog--in 2004. His recent projects include: Torn Apart/Separados which focused on the humanitarian crisis on the southwestern border in Summer 2018) and Targeted Harassment of Academics by Hindutva: A Twitter Analysis of the India-US Connection--a study focused on right-wing social media. He is currently working on an archival and pedagogical projects at The Malcolm X & Dr. Betty Shabazz Memorial and Educational Center in collaboration with the Center for the Study of Muslim Societies.

He is one of the lead faculty in two major international research projects: "Decolonization, the Disciplines and the University" (2019-2023) funded by the Mellon Foundation and "Muslims in India" (2020-2023) funded by the Luce Foundation. He directs the "Qalam Pakistan Initiative" at the History Department at Columbia.

Manan Ahmed teaches “History of South Asia I” — a survey from medieval to the early modern period — in the Fall semester. His other regular courses are “Worlds of Mughal India,” “Borderlands: Towards the Spatial History of Empire,” “Walking & Colonialsm.” He incorporates a Digital History Lab with most of his courses. The syllabi for the various courses are available here.

His articles and book chapters (and reviews) can be accessed via Columbia Academic Commons.