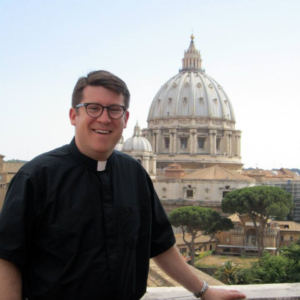 Stephen is a doctoral candidate in the field of U.S. History focusing on twentieth-century political and religious history. His dissertation, The Suburbanization of American Catholicism: Postwar Political Realignment and Religious Restructuring, 1945-1980, explores the effects of post-war suburbanization on American Catholicism by examining changes in the dioceses and parishes of metropolitan New York. His research has been published in the Journal of Church and State, U.S. Catholic Historian, and American Catholic Studies.

“‘It is the Mass that Matters Most:’ Monsignor George G. Higgins and the Place of the Liturgy in Social Action” American Catholic Studies 127:2 (Summer 2016): 29-53

Stephen has been a teaching assistant for undergraduate history courses on American Judaism and the American Presidency. He currently serves as resident priest at the Church of the Holy Trinity on Manhattan’s Upper West Side and as the rapporteur for Columbia University’s seminar on The City.