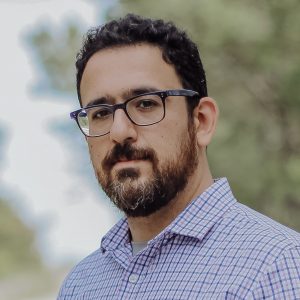 Ali Karjoo-Ravary specializes in intellectual, social, and visual histories of premodern Islam in Arabic, Persian, and Turkic language sources. He is particularly interested in genres of historical writing, the role of cosmology in politics, Sufism, and multilingual poetry in the Islamic East (Mashriq). His book, currently titled Muhammad’s Song: Politics, Performance, and Cosmology in the Fourteenth Century, examines the formation of post-Mongol Islamic monarchy through the life and rule of Kadi Burhaneddin, a scholar turned poet-king in Anatolia whose writing and reception prefigured many of the hallmarks of later Islamic empires. Karjoo-Ravary’s research has been featured in a number of scholarly and popular venues, including bylines in Slate and AlJazeera English, as well as interviews with the BBC and CBC.

“Adorning the King of Islam: Weaving and Unraveling History in Astarabadi’s Feasting and Fighting,” in MAVCOR Journal

“From the Remainder of Adam’s Clay: Chapter Eight of Ibn al-ʿArabī’s al-Futūḥāt al-Makkiyya” in Journal of Sufi Studies Vol. 10, Issue 1-2 (2021)