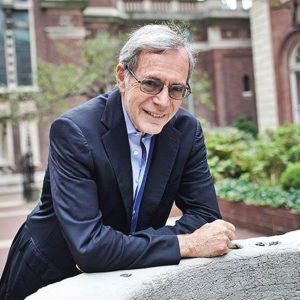 Eric Foner, DeWitt Clinton Professor Emeritus of History, specializes in the Civil War and Reconstruction, slavery, and 19th-century America. He is one of only two persons to serve as President of the Organization of American Historians, American Historical Association, and Society of American Historians. He has also been the curator of several museum exhibitions, including the prize-winning "A House Divided: America in the Age of Lincoln," at the Chicago Historical Society. His book, The Fiery Trial: Abraham Lincoln and American Slavery won the Pulitzer, Bancroft, and Lincoln prizes for 2011. His latest book is Gateway to Freedom: The Hidden History of the Underground Railroad.

Professor Foner's new, free, online courses on THE CIVIL WAR AND RECONSTRUCTION will be available this academic year, beginning in mid-September, from Columbia University at ColumbiaX.

Gateway to Freedom: The Hidden History of the Underground Railroad

Our Lincoln: New Perspectives on Lincoln and His World

Forever Free: The Story of Emancipation and Reconstruction

Voices of Freedom: A Documentary History

Give Me Liberty! An American History

Who Owns History? Rethinking the Past in a Changing World

Dance for a City: Fifty Years of the New York City Ballet

The Story of American Freedom

America's Reconstruction: People and Politics after the Civil War

Freedom's Lawmakers: A Directory of Black Officeholders During Reconstruction

A House Divided: America in the Age of Lincoln

A Short History of Reconstruction

Nothing But Freedom: Emancipation and Its Legacy

Politics and Ideology in the Age of the Civil War

America's Black Past: A Reader in Afro-American History

Before the Civil War

Eric Foner on the Evolution of Liberalsim - The Browser