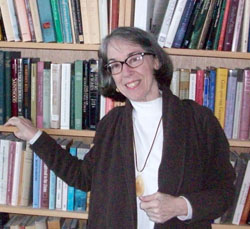 Professor Bynum works on the religious, cultural, social, and intellectual history of western Europe from late antiquity to the end of the sixteenth century. In the 1980s and 1990s her work on gender and the history of the body established some of the paradigms still used in medieval studies. Recently her research has focused on devotional practices, especially devotional objects, in the fifteenth and sixteenth centuries. She is currently exploring the paradox of Catholic survivals, including the survival of women’s monasticism, in Protestant Germany.

Jesus as Mother: Studies in the Spirituality of the High Middle Ages (1982)

Gender and Religion: On the Complexity of Symbols. ed. Bynum, Harrell, and Richman, (1986).

Holy Feast and Holy Fast: The Religious Significance of Food to Medieval Women (1987)

Fragmentation and Redemption: Essays on Gender and the Human Body in Medieval Religion (1991)

Last Things: Death and the Apocalypse in the Middle Ages. ed. Bynum and Freedman (2000)

Wonderful Blood: Theology and Practice in Late Medieval Northern Germany and Beyond (2007)

“Why Paradox? The Contradictions of My Life as a Scholar” The Catholic Historical Review 98 (2012)

“Gender, Generations, and Faculty Conflict: Will Academe’s Mothers and Daughters Repeat the Errors of Its Fathers and Sons?” The Chronicle of Higher Education (November 19, 2012)

“The Sacrality of Things: An Inquiry into Divine Materiality in the Christian MiddleAges,” The Irish Theological Quarterly 78 (2013)

“Avoiding the Tyranny of Morphology, Or, Why Compare?” History of Religions 53 (2014)

“‘Crowned with Many Crowns’: Nuns and Their Statues in Late Medieval Wienhausen,” The Catholic Historical Review 101 (2015)