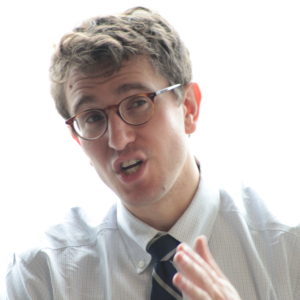 Noah A. Rosenblum studies modern European and American intellectual history, with a focus on the history of legal and political thought. His dissertation, “The Tribe of the Eagle: Presidential Democracy in Thought and Practice, 1927-1952,” explores the emergence of a modern presidency-based regime in the United States in Atlantic perspective. Other research interests include the migration of European intellectuals to the United States in the 1930s, post-Marxist French philosophy, and the history of democratic institutions. Noah pursued concurrent study at the Yale Law School, from which he received his J.D. in May, 2017.  In 2017 and 2018, he will serve judicial clerkships with Judge Jenny Rivera of the New York Court of Appeals and Judge Guido Calabresi of the United States Court of Appeals for the Second Circuit.

“Rethinking the French Liberal Revival: Some Thoughts on the Heterogeneous Origins of the Social Philosophy of Claude Lefort and Marcel Gauchet,” in In Search of the Liberal Moment: Democracy, Anti-Totalitarianism, and Intellectual Politics in France since 1950, eds., Iain Stewart and Stephen W. Sawyer (London: Palgrave Macmillan, 2016)

Of Kingship and Counselors: The Royalist Revolution in Legal History, H-Law, http://www.h-net.org/reviews/showpdf.php?id=42926 (2016)

“Administration and Legal Orthodoxy: A Review of Tocqueville’s Nightmare,” at the Blog of the Society for U.S. Intellectual History, http://s-usih.org/2014/11/administration-and-legal-orthodoxy-a-review-of-tocquevilles-nightmare.html (2014)

Noah has taught in the history department at Columbia and in the history and computer science departments at Yale. He is a longtime Senior Academic Director at the Great Books Summer Program. He was, with David Marcus, co-convener of the graduate student workshop “Consciousness and Society: Intellectual History and Social Thought.” In 2013, he was the lead organizer for the inaugural conference “History in Action: Historical Thinking in Public Life.”

Before beginning graduate school, Noah was a research fellow at Citizens for Responsibility and Ethics in Washington. He has held summer legal positions with the Public Integrity Bureau of the Office of the New York State Attorney General and WilmerHale. In 2015 he was featured on The Colin McEnroe Show on WNPR for his work on public corruption.