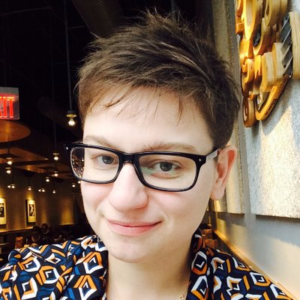 Her dissertation, "The 'Silver Sea' and the Nation-State: The Multifaceted Geopolitics of the Early Modern English Channel," focuses on the political and cartographic history of the Channel region in the sixteenth and seventeenth centuries, particularly during the Dutch Revolt of 1566-1609. She is also interested in exploring the intersection of history and the craft of writing in popular histories and novels. She served as co-President of the Graduate History Association in 2014-15, sitting on the department's History in Action Committee and Graduate Education Committee. In 2015-16 she was one of the department's Graduate Student Coordinators of the History in Action Program and co-organized the conference "High-Stakes History: The Many Conversations of the Historian" (January 2016).

In 2017 she attended the Humanities Without Walls workshop in Chicago (a project of the Chicago Humanities Festival and the Mellon Foundation) and presented at a winter school on "Global Frontiers" at the University of Tubingen. In 2018-19 she presented to the Columbia University Seminar for British Studies and fulfilled a short-term fellowship from the Huntington Library in San Marino, California. She has presented or served as a panelist at conferences including the AHA, the National American Society for Oceanic History, the Writing History Seminar, and the Annual Symposium on Medieval and Renaissance Studies. Her research has also been supported by Royal Museums Greenwich, the Harley Fellowship in the History of Cartography, the Humboldt Yale History Network, and the New York Public Library.

In her spare time, she enjoys traveling and baking, writes fiction, and is an enthusiastic follower of football (of the non-American variety). She has performed and recorded early music with the viola da gamba consort The Teares of the Muses, and has played with the Columbia University Orchestra and the New Opera Workshop on violin.

From January 2018 to January 2020, Caroline served on the American Historical Association's Graduate and Early Career Committee. She has completed the Advanced Track of the Columbia Center for Teaching and Learning's Teaching Development Program.