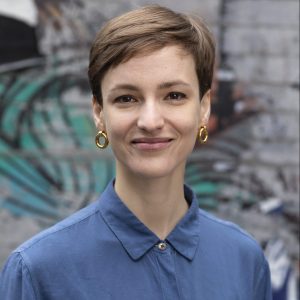 Sarina Kuersteiner is a PhD candidate in history at Columbia University, with a focus on medieval Mediterranean and Italian studies. Her work engages traditional subjects of economic, social and legal history with interdisciplinary and intercultural approaches, informed by theories and methods of musicology, art history, media studies and psychology. Her research on notions of risk and insurance in Mediterranean trade has developed into a broader consideration of the role of medieval notaries not only as recorders of the legal infrastructure, but also as shapers of it. Her dissertation "Minds and Margins: Notarial Culture in northern Italy, ca. 1200-1350," examines the role and self-image of public notaries in the development of contractual societies through the study of poetry, prayers, images and music entered at the margins of notarial registers.

Having been awarded a Teaching Scholar Fellowship by Columbia University, Sarina will be offering her seminar "From Oracles, Fortune and Gifts of God to Mathematics: The History of Risk Before the Probability Calculus c. 1350 CE – c. 1660 CE" in the Spring semester 2021.

Her research is supported by the Swiss National Science Foundation, where she is a fellow from September 2019 to December 2020. During the term of fellowship, she has an institutional affiliation with the University of Parma (Italy). In the past, her research has been supported by a Research Fellowship from the Institute for Religion, Culture, and Public Life at Columbia University, by a Jerrold Seigel Summer Fellowship in Intellectual and Cultural History from the Center for European and Mediterranean Studies (New York University) and by the Swiss Study Foundation.

"Reliquary-monstrances as archival signatures: How Bolognese notaries shaped the meaning of archives, 1289-1294." In Collecting, Curating, Assembling: New Approaches to the Archive, edited by Emily Savage. London: Routledge. (solicited and in progress)

Sarina has served as co-president of the Graduate History Association at Columbia University (2015-2016). She is one of the co-founders of the public history project “Medievalist Toolkit,” awarded a History in Action Program Award by Columbia University (2018). With the Medievalist Toolkit, the project group aims to make their knowledge about the Middle Ages useful and accessible to organizations such as Life After Hate, an organization which facilitates and supports the social re-integration of former extremists.