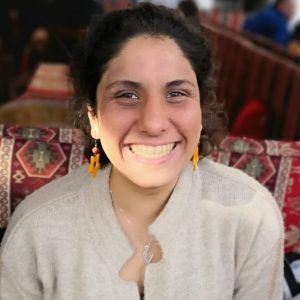 Zeinab is a PhD candidate in the International and Global History (IGH). Her research focuses on inter-imperial relations and impact of new concepts and technologies in the nineteenth century Middle East and South Asia. Her dissertation, entitled “Bloodless Battles: Contested Sovereignty and Citizenship in Ottoman Iraq, 1831-1909,” examines the conflicting and evolving interests in Ottoman Iraq analyzing Ottoman, Qajar -in modern Iran-, and British interests, policies, and personnel, that sought to assert sovereignty over both the space and the population. Zeinab’s research has been supported by the GSAS International Travel Fellowship and Sakıp Sabancı Summer Fellowship Award.

Zeinab is a host for the Ottoman History Podcast.

Zeinab is currently working on the Ottoman visual sources as part of an international group of researchers for the Palestine from the Sky project and exhibition run by the Qattan Foundation.

She has worked as the lead graduate project developer and cataloger for the Muslim World Manuscripts (MWM) Project at the Rare Books and Manuscripts Library (RBML), Columbia University. The project has won the CLIR Digitizing Hidden Special Collections and Archives grant in 2017 in conjunction with multiple other institutions. She is co-editing a special issue on the collection for the Journal of Philological Encounters contracted to be published in summer 2020.

Zeinab has served as a Teaching Fellow in the Columbia University History Department for courses on Middle Eastern history and South Asian history. She has also served as an editorial assistant for the Journal of Comparative Study of South Asia, Africa and the Middle East.

Prior to beginning her PhD, Zeinab worked as an assistant researcher for the Balkh Art and Cultural Heritage Project (BACH) at University of Oxford Oriental Institute.