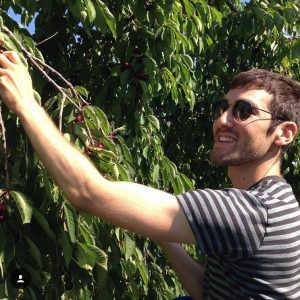 Benjamin Serby is a doctoral student focusing on US intellectual and political history since 1945. He grew up in the New York City area, and received his BA with highest honors from Brandeis University in 2010. His undergraduate thesis, "The Scientific Ideologist: Lewis Feuer and the Marxist Roots of Neoconservatism," explored the changing politics of the "New York intellectuals" from the Great Depression through the 1970s. Since that time, his research interests have grown to include the history of American radicalism; the relationship between social movements and social theory; psychoanalysis; critical theory; and the history of New York City.

Benjamin's dissertation, "Gay Liberation and the Politics of the Self in Postwar America," situates the gay liberation movement in the United States in the context of the history of ideas about the self, society, and the relationship between both in the three decades after the Second World War. In so doing, it demonstrates how broad cultural and political currents shaped the identities and solidarities underpinning gay politics, and how a collective demand for “liberation” reflected widely shared anxieties about psychological domination, personal autonomy, and mass culture. Combining the approaches of social history, literary criticism, reception history, and intellectual biography, "Gay Liberation and the Politics of the Self"  brings LGBT history into conversation with the historiographies of American social thought and of social movements. It draws from extensive archival research into key activists, and from close readings of the alternative newspapers and mass-market paperback books in which their ideas were expressed, debated, and disseminated. Benjamin's research demonstrates the extent to which gay liberationists drew on midcentury social criticism, the counterculture, and the radical politics of the 1960s—above all, second-wave feminism, the new left, and Black Power--in a context of material prosperity and global decolonization.

In addition to his dissertation research, Benjamin has taught in Columbia's history department and advised undergraduates through the Center for American Studies. During the 2016-2017 academic year, Benjamin was an Andrew W. Mellon Predoctoral Fellow in Museum Education at the Museum of the City of New York, where he taught K-12 students about social movements and urban history, and where he also developed public history and education content, including for the exhibition Gay Gotham: Art and Underground Culture in New York City. In 2016, Benjamin was awarded a History In Action HAPA grant to complete an online exhibition about the life and work of the historian Richard Hofstadter drawn from archival materials and previously unpublished documents. He has also worked as a research archivist at Columbia’s Rare Book and Manuscript Library and conducted history walking tours for general audiences in lower Manhattan. During the 2018-2019 and 2019-2020 academic years, Benjamin advised and taught first-year students in Columbia's Undergraduate Scholars Program.

Finally, in his capacity as a public historian, Benjamin has produced content for a range of institutions, including the Jewish Museum, the High Line, the Museum of the City of New York, and the Alliance for Downtown Manhattan. His writing has appeared in The Nation, Jacobin, and elsewhere. He is an affiliate of Columbia’s Research Initiative on the Global History of Sexualities.