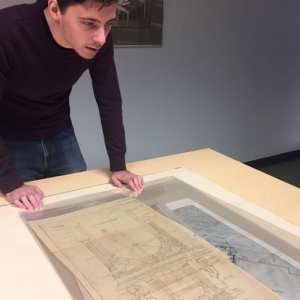 I'm a Ph.D. candidate in the history department studying the legal, institutional, and intellectual history of late Antiquity and early medieval Europe. I hold fellowships from the Doris G. Quinn Foundation and the Heyman Center for the Humanities at Columbia. My dissertation, “Parsing Truth in Merovingian Gaul: Evidence and the Early Medieval Critic,” is about how people distinguished truth from falsehood in a set of post-Roman kingdoms occupying much of France and western Germany from c. 450 to 751. Using Merovingian saints’ lives, legal documents, law codes, letters, and theological and philosophical texts, I consider how people and institutions navigated the possibility that information might be presented with the intent to deceive, or might just be wrong. Responses to questions about the reliability of information ranged from the practical to the abstractly epistemological, and the period produced multiple and contradictory arguments about how knowledge could, indeed, be certain. I’m also interested in the historiographical phenomenon of “premodern” rationality, a category found in literature on belief, the law of proof, and the history of science, and applied to many times and places, though associated particularly strongly with early medieval Europe.

An Americanist colleague, Brianna Nofil, and I have collaborated on Medieval America, a pop history project examining the traffic in medieval architecture from Europe to the U.S. in the early 20th century. So far, we’ve written a long-form piece for Atlas Obscura and presented at conferences on art crime, design history, and reuse studies.

At Columbia, I was the Core Preceptor for African Civilizations in 2018-2019, using my minor field in the history of precolonial, sub-Saharan Africa. I've also taught everything from world history to Ancient Greece to Modern Latin America, and served as graduate co-coordinator for the department's History in Action initiative.