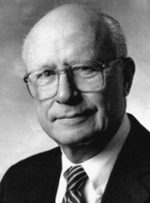 Henry Franklin Graff, Professor Emeritus of History, specializes in the social and political history of the United States. He received his B.A. from the City College of New York, and his M.A. and Ph.D. from Columbia University. His publications include: Bluejackets with Perry in Japan (New York Public Library), 1952; The Modern Researcher with Jacques Barzun (Harcourt Brace), 1957; The Tuesday Cabinet: Deliberation and Decision on Peace and War Under Lyndon B. Johnson (Prentice Hall), 1970; The Presidents: A Reference History (Scribner), 1984; and Grover Cleveland (Times Books), 2002.